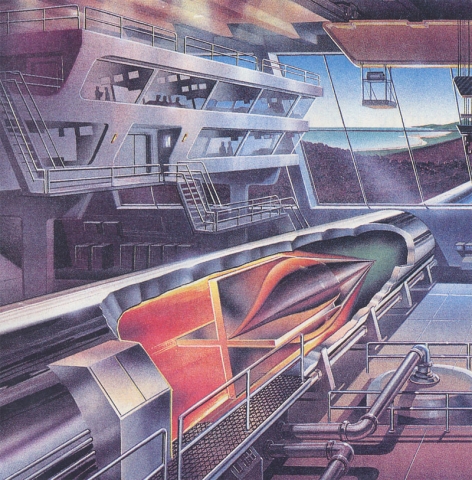 There are three crucial issues to consider for any direct space launch technology:

Artist conceptions of various aspects of a ram accelerator space launch system illustrate key elements. A control tower would oversee operations. The ram accelerator launch tube would be installed on the side of a mountain, optimization studies show 18-22 degree inclination angle from horizontal is about right. The projectile exits the muzzle at 6+km/s, quickly leaves the atmosphere and jettisons its aeroshell prior to orbit insertion burn. 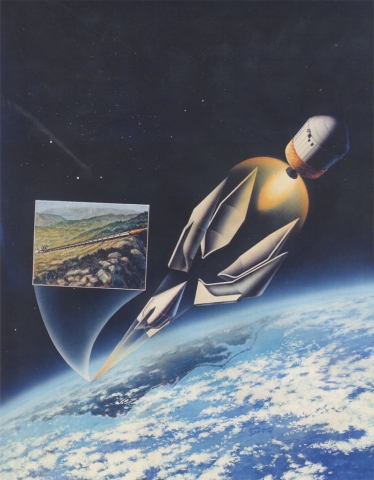 A kick-rocket is necessary for orbit insertion, regardless of direct launch technology, otherwise the projectile returns to Earth. Rendezvous with orbital tugs or tethers may meliorate need for orbital kick rocket. Payloads of interest for the space station are basic supplies, propellant, and construction elements/materials for station expansion. Communication and Earth observation satellites can also be launched with ram accelerators. Delivering low-cost propellant to a “depot” to support future lunar and Mars missions is another high value application.

The ram accelerator launch tube will consist of multiple subdetonative and superdetonative stages. These stages can be operated at constant pressure, thus isolation valves between stages can be opened prior to launch to allow some mixing of propellant and eliminate any diaphragm impacts within the launch tube. The velocity-distance profile of a constant-pressure, multistage ram accelerator is shown below. The projectile must carry some kind of rocket for orbit insertion; e.g., the projectile shown here (2000 kg) has a payload mass fraction of 50% when rocket mass is included as deadweight. Higher muzzle elevation for the space launcher reduces drag losses and the corresponding velocity boost (ΔV) required for orbit insertion, resulting in smaller rocket requirements and higher payload fraction. 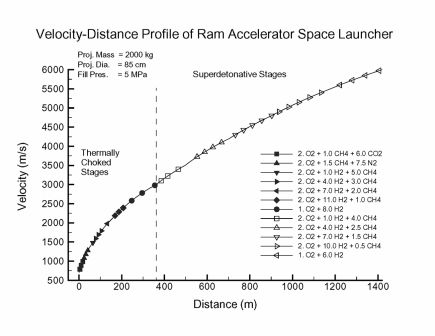 Large hypersonic projectiles in the lower Earth atmosphere are noisy! The following chart shows sound overpressure intensity downrange of ram accelerator muzzle. The intensity of the shock propagating to the surface decreases as projectile altitude increases and atmosphere density drops. 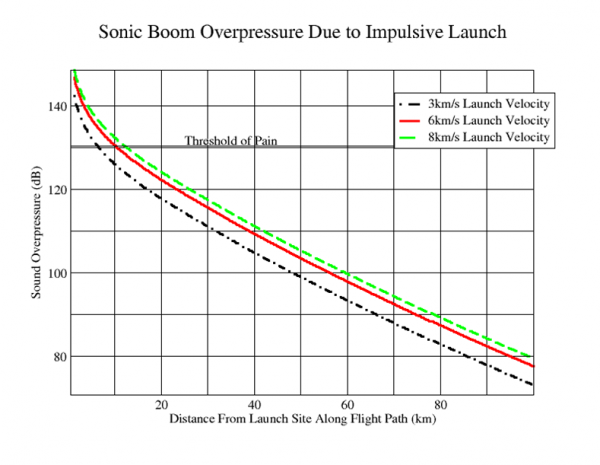