The ram accelerator is a hypervelocity launcher that uses chemical energy to accelerate projectiles to hypersonic speeds (Hertzberg, Bruckner, and Bogdanoff, 1988*). Although the ram accelerator launch tube resembles a conventional long-barreled gun, its principle of operation is very different, being closely related to that of supersonic airbreathing ramjet engines. A stationary tube, analogous to the cylindrical outer cowling of a ramjet engine (Fig. 1), is filled with a combustible gaseous mixture, e.g., methane, oxygen, and a diluent such as nitrogen, at pressures of 5-200 bar. No propellant is carried aboard the projectile, which is similar in shape to the centerbody of a ramjet. The projectile has a diameter smaller than the launch tube bore, and is normally fitted with guide fins that provide for centering in the tube. The projectile travels at supersonic speed relative to the propellant gas, which it compresses in the flow area contraction between the nosecone and tube wall. The propellant flow remains supersonic with respect to the projectile as the gas passes through the throat, i.e., point of minimum flow area between the projectile and the surrounding tube wall. Below approximately Mach 4, combustion typically occurs at full tube area behind the projectile and thermally chokes the flow, thereby establishing a normal shock system on the aftbody of the projectile that renders the flow subsonic downstream. This shock system recedes as the projectile Mach number increases. The process of thermal choking replaces the nozzle of a conventional ramjet, resulting in a stable combustion process that travels with the projectile in a propulsion cycle referred to as the thermally choked ram accelerator mode.

Ram accelerator systems typically consist of a conventional solid propellant or light gas gun pre-launcher and a ram accelerator tube (Fig. 3). Thin diaphragms close off each end of the launch tube to contain the propellant. The operational sequence is initiated by the pre-launcher gun injecting the projectile into the launch tube at speeds greater than Mach 2.5 relative to the propellant, as illustrated in Fig. 3. A lightweight obturator, or piston, in contact with the base of the projectile seals the gun bore during this initial impetus. Acceleration from rest of the projectile/obturator combination compresses residual air in the gun tube via a series of reflected shock waves (Stewart et al., 1998; Maemura et al., 1998). When the projectile punctures the entrance diaphragm and enters the launch tube, the slug of shock-heated air ignites the propellant near the base of the projectile. A stable combustion zone is formed which travels with the projectile, maintaining a wave of high pressure that propels the projectile forward. Following ignition, the obturator rapidly decelerates and does not participate in the subsequent acceleration process. 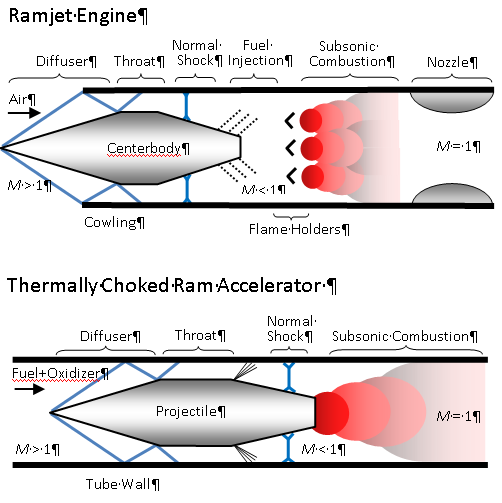 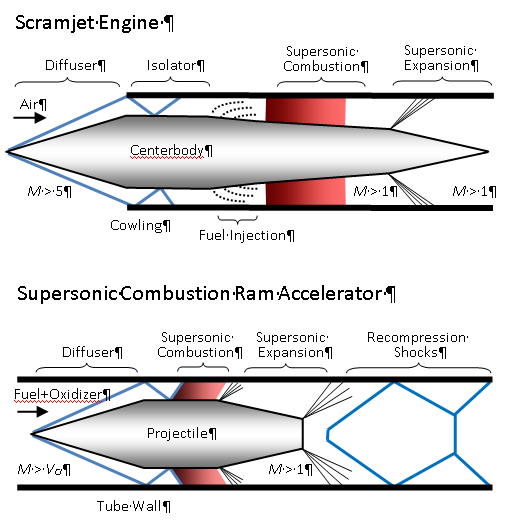 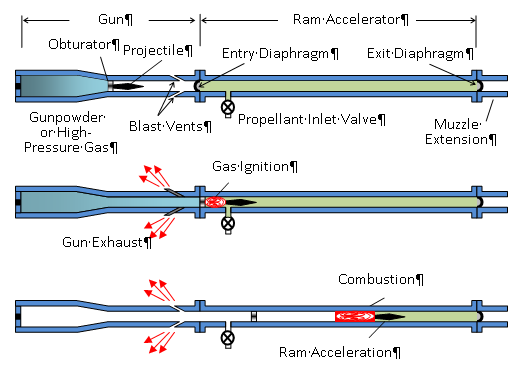 What distinguishes the ram accelerator from a gun is that its source of energy (gaseous propellant) is uniformly distributed throughout the entire length of the launch tube, whereas in a gun the energy source is concentrated at the breech as either a charge of gunpowder or high pressure gas. In addition, to center the subcaliber ram accelerator projectile, either fins that extend to the wall or rails along the length of the launch tube are used. During ram acceleration operation the highest pressure in the tube is always at the projectile base, rather than at the breech as in a gun, and the bulk of the combustion products has relatively little residual motion with respect to the launch tube. Only a small volume of high pressure gas exits the tube with the projectile. These characteristics of the ram accelerator result in much more uniform projectile acceleration than in a gun, much higher velocity potential, and very little muzzle blast and recoil. Furthermore, the acceleration and muzzle velocity of the ram accelerator can be readily tailored to specific needs by adjusting the propellant composition and fill pressure.

In a conventional airbreathing ramjet, the maximum operating Mach number (typically Mach 5 – 6) is limited by the reduced heating value of the fuel due to excessive combustion product dissociation associated with the high enthalpy of the approaching gas. However, the maximum operating Mach number of the thermally choked ram accelerator is limited by the shock wave system receding on the projectile aftbody, which reduces the effective area on which the high pressure gas can act. By comparison, to increase the operating Mach number of airbreathing ramjet engines the flow is allowed to remain supersonic throughout the combustor to reduce the end state combustion temperature and enable more heat to be added to the flow (Fig. 2). These supersonic combustion ramjets, or scramjets, generate prodigious thrust yet also have very high drag that increases with increasing flight Mach number. Thus, their maximum operating Mach number occurs at the point where thrust equals drag, which can be anywhere in the range of Mach 6 – 15, depending on the details of scramjet design. In an analogous manner, supersonic combustion on the ram accelerator projectile body will accelerate it, in principle, up to Mach numbers of 7 – 15, depending on geometry and propellant characteristics. A flow field schematic of the supersonic combustion ram accelerator is also shown in Fig. 2. As the in-tube Mach number increases, the static temperature in the flow passage between projectile body and tube wall increases, which may ultimately lead to the combustion process coupling with an oblique shock wave to form an oblique detonation wave. Such a wave acts as a flame holder for the supersonic combustion process in a manner similar to that proposed for some shock-induced-combustion scramjet concepts (Sislian 2000).

In addition to the hypervelocity potential of the ram accelerator, its scalability and unique capability of tailoring the thrust profile for any muzzle velocity have led many other researchers to study the concept (Takayama and Sasoh (eds), 1998; Bauer (ed), 2000). Potential applications of the ram accelerator include hypersonic aerodynamic testing (Naumann and Bruckner, 1994), and direct launch to orbit (Bruckner and Hertzberg, 1987; Bogdanoff, 1992; Witherspoon and Kruczynski, 2000, Knowlen, Joseph and Bruckner, 2007). To date most of the research has focused on the internal ballistics of the ram accelerator; however, programs to develop aeroballistic range launchers for relatively large test articles (≥ 20 kg) and direct space launch systems for insertion of small payloads (≤ 10 kg) into low Earth orbit are currently in progress at the UW.