Since 1983 research has been carried out at the University of Washington on a hypervelocity launcher concept called the ram accelerator. This device owes little to conventional hypervelocity launchers (powder guns, rail guns, light gas guns, etc.). In conventional powder guns, the propellant (e.g., nitrocellulose or gun powder) is burned behind the projectile in a breech, generating high pressure gas which expands as it pushes the projectile down the barrel. As the projectile goes faster, the propelling gas must expend more energy to accelerate itself just to keep up with the projectile. Once the projectile reaches a certain speed, the propellant gas pressure exerts only enough force to overcome friction, and thereafter the projectile begins to slow down if the barrel is too long. As a rule of thumb, this velocity limit typically corresponds to ~twice the sound speed of the propellant prior to its expansion (without friction the ideal limit is ~5 times the sound speed). For high performance laboratory powder guns, this upper velocity limit is around 2-2.5 km/sec.

To reach velocities greater than those possible with powder guns, low molecular mass propellants heated to high temperatures can be used to raise the propellant sound speed, and thus the gun’s upper velocity limit. Two-stage light gas guns accelerate a piston (with either gunpowder or compressed gas) in a “pump tube” to compress and heat hydrogen propellant. The hydrogen is compressed to peak temperature and pressure in an “acceleration reservoir” just prior to its release behind the projectile. The hydrogen is readily heated to ~3000 K in this manner which raises its sound speed to over 4000 m/s, thus muzzle velocities of ~7 km/s are possible with these launchers. Because of their hypervelocity capability these launchers have been proposed for space launch applications; however, scaling issues and overall system complexity have to date precluded them from being applied in this manner.

In conventional guns, whether they use gunpowder or light gas propellant, the highest pressure in the launcher is always at the breech, where it does the least amount of good. The lowest pressure of the system is always at the base of the projectile, where high pressure is desired, and continuously decreases as the projectile is accelerated to higher velocities. The pressure profile of a conventional gun is shown the following schematic.

In 1983, Prof. Abe Hertzberg and two colleagues at the University of Washington, Prof. Adam Bruckner and Dr. David Bogdanoff, proposed a novel approach to the problem of launching large payloads to hypervelocity: fly a jet engine through the tube! In this situation the launch tube is filled with propellant and a subcaliber projectile is shot directly into it. With a properly shaped projectile, a ramjet-like propulsive cycle can be initiated in which the supersonic projectile ram-compresses and ignites the propellant as it travels through the tube. This process raises the base pressure on the projectile, generating thrust, without any significant acceleration of the propellant. This results in a pressure pulse being accelerated down the tube, self-synchronized with the projectile, as shown in the preceding schematic. Thus the highest pressure in the system is always right behind the projectile, where it does the most good, and not in the breech (as in a conventional gun). Since the projectile must fly through its own propellant, a gaseous propellant is used. You can think of the projectile as "surfing on a combustion wave" that is accelerating down the length of the launch tube.

The ram accelerator can operate at in-tube Mach numbers up to ~8, which corresponds to ~8 km/s in H2-O2 propellants, thus it has the potential to launch projectiles at orbital velocities. Proof-of-principle was first demonstrated at 38-mm-bore in the UW ram accelerator facility in 1986. Since then, this facility has operated at velocities up to 2.7 km/s and Mach numbers up to 8. Fill pressures as low as 3 atm and high as 200 atm have been successfully used, yielding data at a wide range of accelerations and thereby demonstrating the throttle-ability of the concept. This enables the ram accelerator to have a relatively low ratio of peak-to-average acceleration, allowing projectiles and payloads to be designed with high structural efficiency (i.e., high launch acceleration loads result in thicker projectile walls and less volume for payload). 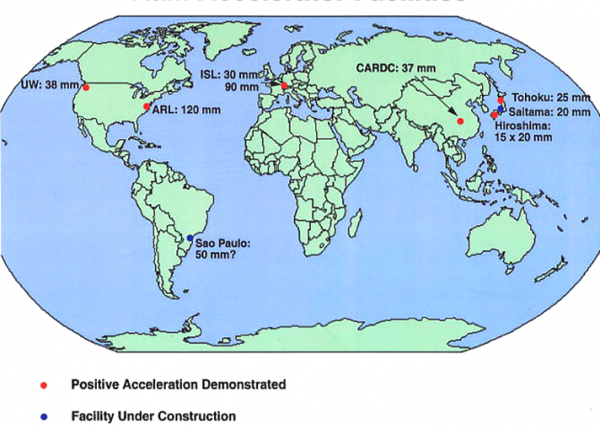