The University of Washington's ram accelerator facility consists of a light gas gun, the ram accelerator test section, final dump tank, and a projectile decelerator. The system has been modified by replacing the first two 2-m-long tubes of the test section with thick-walled tubes for high pressure (up to 3000 psi) experiments.

Light Gas Gun
In order to start the ram accelerator process, the projectile must enter the test section at supersonic Mach numbers greater than M = 3 or so, which corresponds to entrance velocities around 1.1 km/s for air-methane propellant. The projectile is accelerated to this velocity with a 6-m-long, 38-mm-bore, single-stage helium light gas gun that has a maximum breech pressure of 6000 psi. At the end of the launch tube is a 60-cm-long section of perforated tube, which vents the helium gun gas from behind the projectile into the helium dump tank. The projectile then bursts through a thin plastic (Mylar) diaphragm at the entrance to the ram accelerator section. 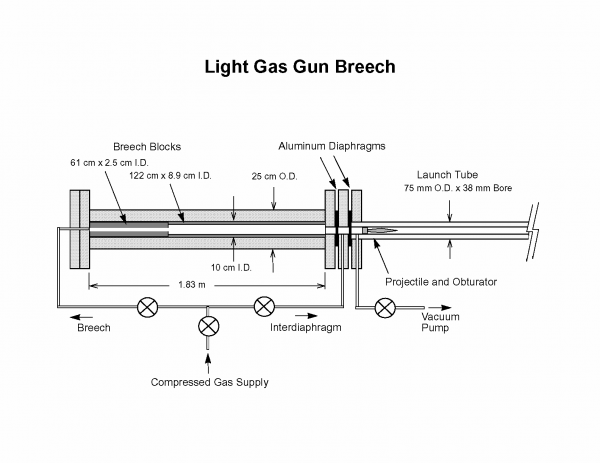 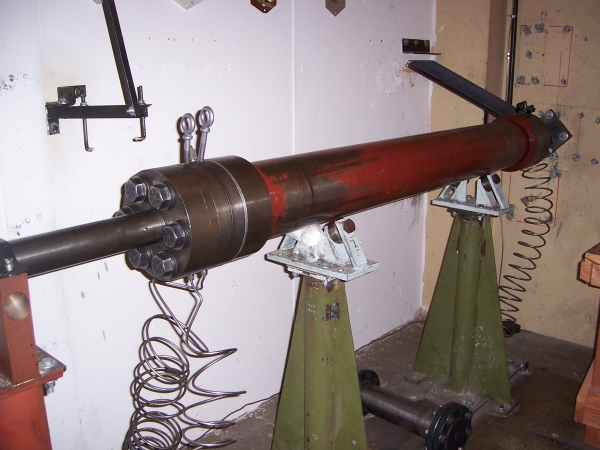 Ram Accelerator Test Section
The 16-m-long ram accelerator test section shown below is composed of 8, 2-m-long, high strength steel tubes with a 38-mm (1.5 inch) inner bore and 102-mm-O.D. Thin Mylar diaphragms are used to seal each end of the tube and separate segments containing different propellants in multi-stage experiments. There are 40 multiple-port instrumentation stations located at 40-cm intervals along the length of the ram accelerator test section. These ports allow the simultaneous use of 3 or 4 instruments at each station to examine the flow field around the projectile. Standard instrumentation typically consists of pressure transducers, electromagnetic sensors, and fiber optic luminosity probes at each station. Fast response thermocouples and ionization probes are also used on occasion. At the end of the ram accelerator test section the projectile pierces another Mylar diaphragm and exits through a 76-cm-long “drift tube” prior to its entry into the final dump tank. 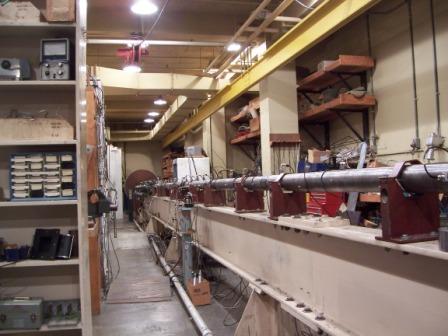 Final Dump Tank
The final dump tank has an internal diameter of 1.5 m and is used to contain both the propellant gases from the test section and the helium from the light gas gun. Its volume is such that the maximum residual system pressure after an experiment is under 15 psig. These gases are immediately vented to the outside of the building and the system is evacuated after every experiment. The projectile experiences about 2 m of free flight before it impacts the decelerator tube. There is a pair of 25-cm view ports that are sometimes used to photograph the flight of the projectile with high-speed cameras. There is also a two-beam laser velocity measuring system that permits a final measurement of the projectiles velocity.

Projectile Decelerator
After leaving the dump tank, the projectile enters the decelerator where it is brought to rest by impacting metal plates and material fibers. Due to space restraints, it is impossible to catch high-speed projectiles in a non-destructive fashion.

High Pressure Test Section
Circa 1999, the first two 2-m-long tubes of the ram accelerator test section were replaced with two 1-m-long and one 2-m-long high strength steel tubes. These tubes have the same bore (38-mm) and a larger O.D. of 152 mm, which gives them a static pressure rating of 150,000 psi. The propellant handling system (plumbing schematic) has been upgraded to enable experimentation at up to 3000 psi fill pressure. 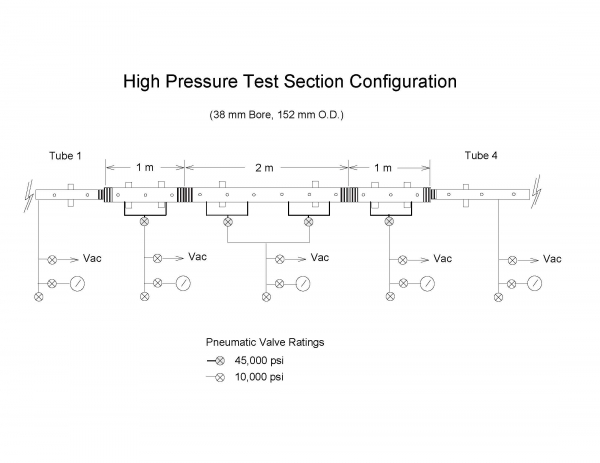 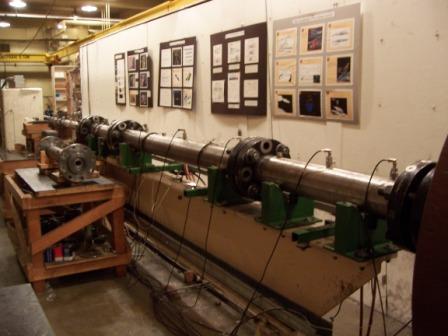