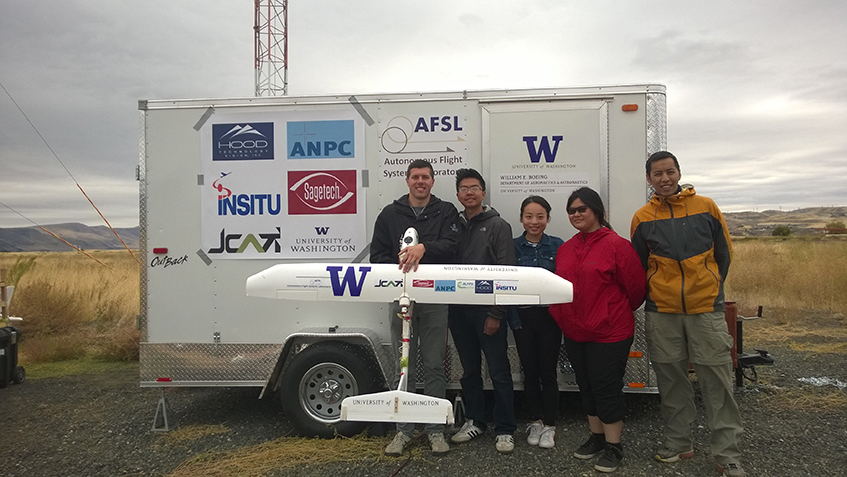 The AFSL Team at the JCATI Field Test with their Mobile Flight Operations Unit.

A major concern looming in this industry is the integration of UAS into National Air Space (NAS). In an effort to help make UAS more visible to aviation stakeholders, the Autonomous Flight Systems Laboratory launched a collaborative project with industry partners to test how UAS interact with manned aircraft. This multi-party effort includes: UW, Hood Technology, Sagetech, ANPC, and Insitu. Additional funding was awarded to UW A&A Professors Chris Lum and Juris Vagners by the Washington state Joint Center for Technology & Innovation (JCATI). Their project goal was “Specialization, Testing and Integration of NextGen Technologies on Unmanned Aerial Systems.”

In September 2016, after one year of collaboration, the JCATI team successfully demonstrated the following during a flight test:

At 6.5 pounds, the system they employed was one of the smallest aircraft to ever carry an ADS-B transponder and demonstrate GPS-denied operations. With the FAA’s mandate of integrating ADS-B on virtually every aircraft in the USA by 2020 added to the fact that UAS are expected to be the one of the fastest growing sectors of the aerospace industry, this technology has the potential to impact an enormous number of stakeholders by 2020. Potential applications could affect airlines, logistics, remote internet, utility monitoring, public safety, agriculture, entertainment, real estate, and fire prevention – just to name a few.

At UW, the Autonomous Flight Systems Laboratory is also delving into other technologies. For example, exploring how aircraft could follow a target using vision instead of sensors and investigating ways to incorporate multi-spectral imagery to perform precision agriculture missions. Prof. Chris Lum presented these topics at the 2016 UAS Conference in Sunnyside Washington as well as the New Horizons for Unmanned Aircraft forum in Seattle. He can be reached for comment or interview at lum@aa.washington.edu. 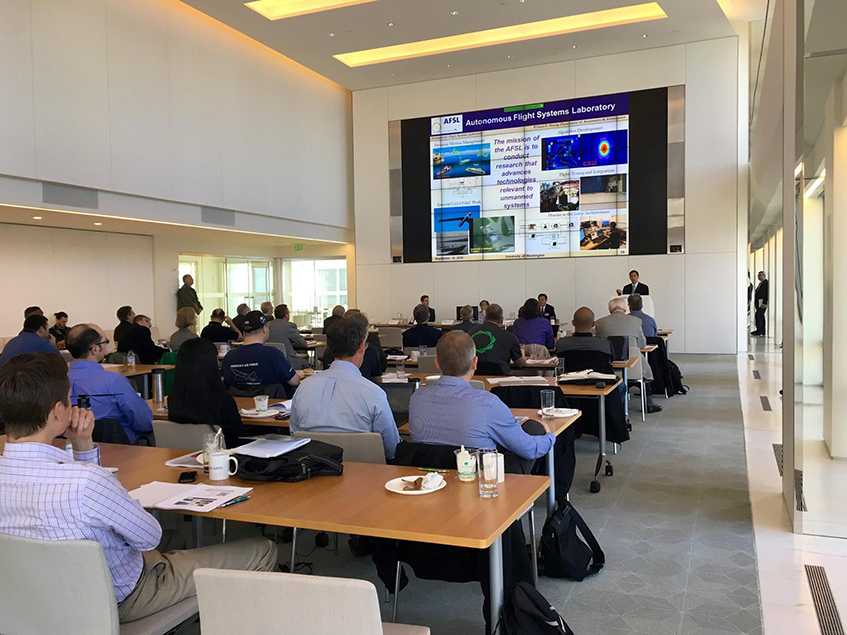 Professor Lum presenting AFSL activities to government and industry at the New Horizons for Unmanned Aircraft forum in Seattle.

For anyone interest interested in learning more, the Autonomous Flight Systems Lab is posting updates on Facebook as well as reports including a publication in a the American Control Conference, AIAA AVIATION, and AIAA SciTech. Additional data such as high-resolution photos and information will be compiled and published on the AFSL webpage later this fall.