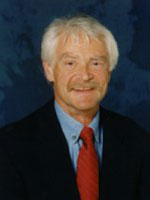 Professor Vagners completed his undergraduate studies at the University of Washington in Aeronautical Engineering in 1961. He then went to Lockheed Missiles and Space Company to work on satellite programs and pursue graduate studies at Stanford University under the Honors Cooperative Program. He received his doctorate degree from Stanford in Aeronautical and Astronautical Sciences in 1967. Professor Vagners joined the faculty at the University of Washington in the Department of Aeronautics and Astronautics in 1967. From 1982 to 1990, he held a joint appointment in the Applied Mathematics Department, and was Adjunct Professor in Electrical Engineering from 1994 to 2002. Professor Vagners retired from full time teaching duties September, 2002, and remains active on various research projects.

Professor Vagners' teaching interests included dynamics, classical control systems analysis and synthesis, and optimal control and estimation. His research interests have been in the application of unconventional control techniques, i.e., artificial neural networks, fuzzy logic and evolutionary programming, to control systems design. Most recently, his research has focused on autonomous and semi-autonomous Uninhabited Aerial Vehicles (UAVs). In 1998 he collaborated with The Insitu Group on the first crossing of the North Atlantic by a robotic aircraft. The Aerosonde Laima , at ten foot wing span and gross take-off weight of 29 lbs, was not only the first, but by far the smallest aircraft to accomplish such a historic feat. The crossing took 26 hours and 45 minutes and consumed one and a half gallons of aviation gasoline. Since then he has been working on cooperative path and mission planning for multiple UAVs. Another current area of interest is collaboration between UAVs and Unmanned Ground Vehicles (UGVs) and Unmanned Surface Vehicles (USVs).