Fusion energy is finally getting its moment

By: Amy Sprague
Top image: Rendering of a plasma sphere.

Investment in fusion energy, including in A&A’s research and spinoffs, is taking off with advances in computing.

In the last few years, investment in a fusion energy future has taken off. Everett-based Helion recently announced a $500 million round of investment with the potential for $1.7 billion more. Our own A&A spinoff Zap Energy landed close to $200 million, and our A&A fusion labs have received over $5 million of funding over the past two years. And while fusion energy has been decades in development, the current moment is offering vast advancements in computing power, which is finally robust enough to run the modeling needed to figure out the last sticky issues with sustaining a fusion reaction long enough for meaningful power production. And A&A is providing key research to make this sustainable energy future come as quickly as possible.

A&A’s is pursuing two different approaches to compact, cost-effective fusion energy. As plasmas need to be formed in specific shapes to stably undergo sustained fusion, each lab’s strategy involves a different shape and device for the magnetic fields and confined plasma. The HIT-SI Lab, led by Senior Research Scientist Chris Hansen, takes advantage of the natural property of plasmas to self-organize and uses Imposed-Dynamo Current Drive to keep it going in a spheromak. In contrast, the Flow Z-Pinch Lab, led by Professor Uri Shumlak, forms and compresses plasma in a 50-cm long column, the Z-pinch, with plasma flowing along its length, which, in turn, stabilizes it.

Though A&A’s approaches through a spheromak and a Z-pinch can lead to cost-competitive commercialization, further advances are needed. Fusion energy, the power source of the sun, is, to say the least, difficult to achieve. Plasmas need to reach temperatures over 100 million degrees Celsius, which makes confining and stabilizing them extremely challenging. Plasmas cool down quickly unless continuously heated and must be extremely well insulated to maintain fusion conditions. Both strategies use magnetic fields for the plasmas and keep them from touching the walls of the reactor.

Plasma modeling is vital to help us unlock the potential of plasma to help us ensure the safe operation of satellites and spacecraft and realize the potential of plasmas for fusion energy, propulsion and other engineering applications. Unfortunately, this task is extremely challenging due to the complex physics involved and the need to capture wide ranges of both time and space.

A&A Professor Uri Shumlak, who leads both the Flow Z-pinch Lab and the Computational Plasma Dynamics Lab and is a co-founder of Zap Energy, is pushing the frontier of what is possible to model with limited computing power by assembling a hierarchy of models and using the simplest possible model that still captures important physics in each region of study.

Researchers will target higher resolution and higher fidelity models only where the local conditions require it, which will accelerate simulations and facilitate studying plasma systems in greater detail over a wide range of time and space. 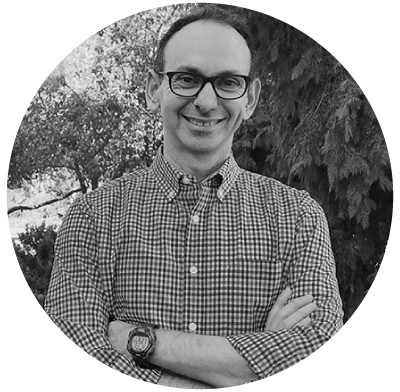 “Not only will we be able to do plasma simulations faster, but now simulations that we previously couldn’t do will become possible on devices from a laptop to a supercomputer. It opens up new possibilities of deeper understanding and development of plasma science and technologies.”

A&A Senior Research Scientist Chris Hansen in the HIT-SI Lab is teaming up with UW mechanical engineering professor Steve Brunton to leverage data-driven (machine learning) approaches to improve our ability to rapidly predict the behavior of magnetized plasmas by “discovering” simplified models for these systems directly from data and known physical laws, such as the conservation of energy.

Such simplified models may require only a few parameters to describe the important aspects of the system, compared to the many millions or billions required to resolve the entire system with conventional simulations.

Hansen explains, “One of the primary challenges to understanding and predicting plasmas is the huge range of scales involved. For example the evolution of a solar flare 60,000 miles across can depend on plasma dynamics on the scale of a few feet, about 10 million times smaller than the primary structure.”

Resolving this huge range of scales can often be out of reach with present technology and even approximations can require complex computer models run on massive supercomputers. He continues, “These new methods allow us to bypass a lot of extra information in the system and focus on what’s really important for a given problem.” 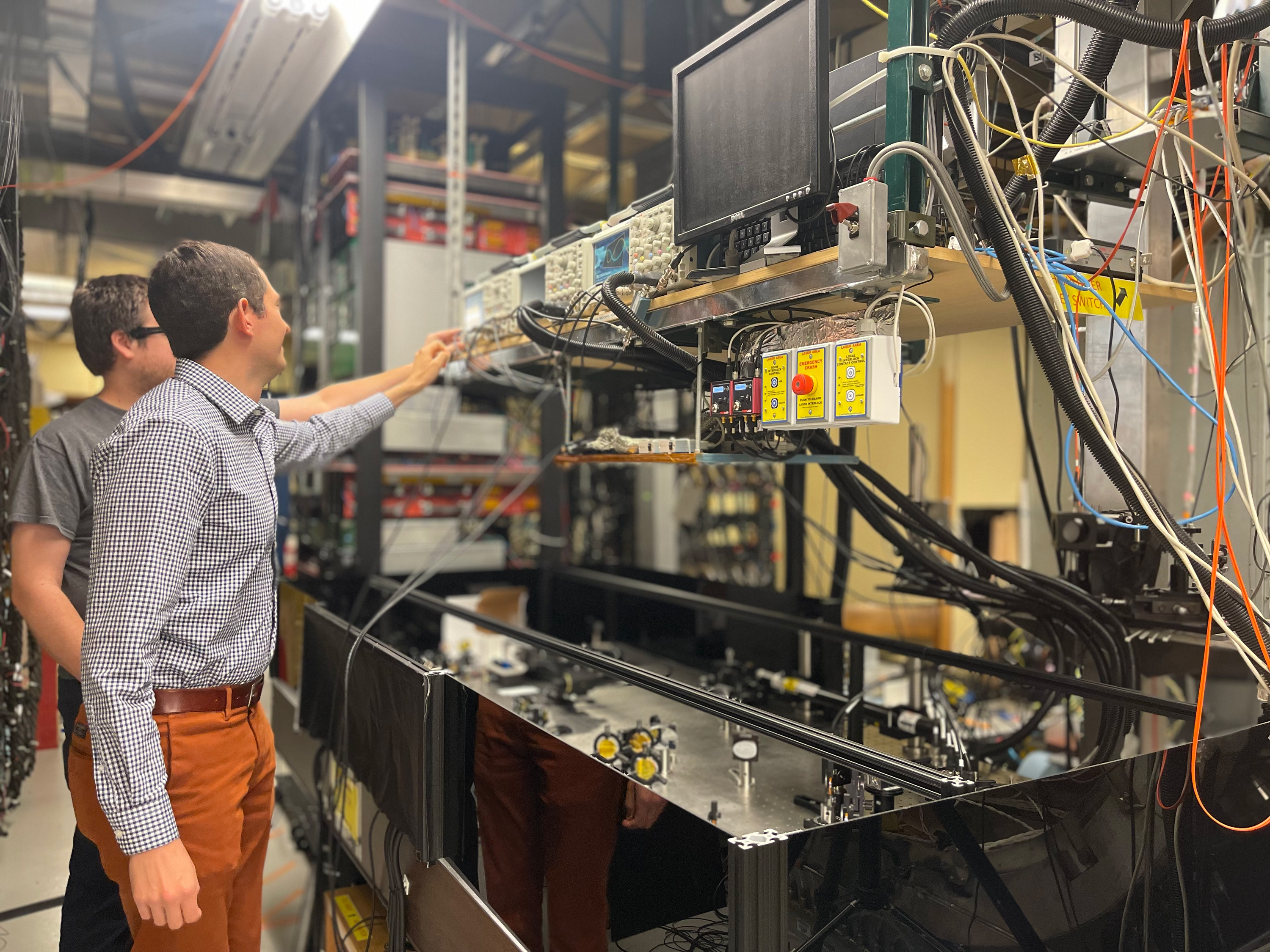 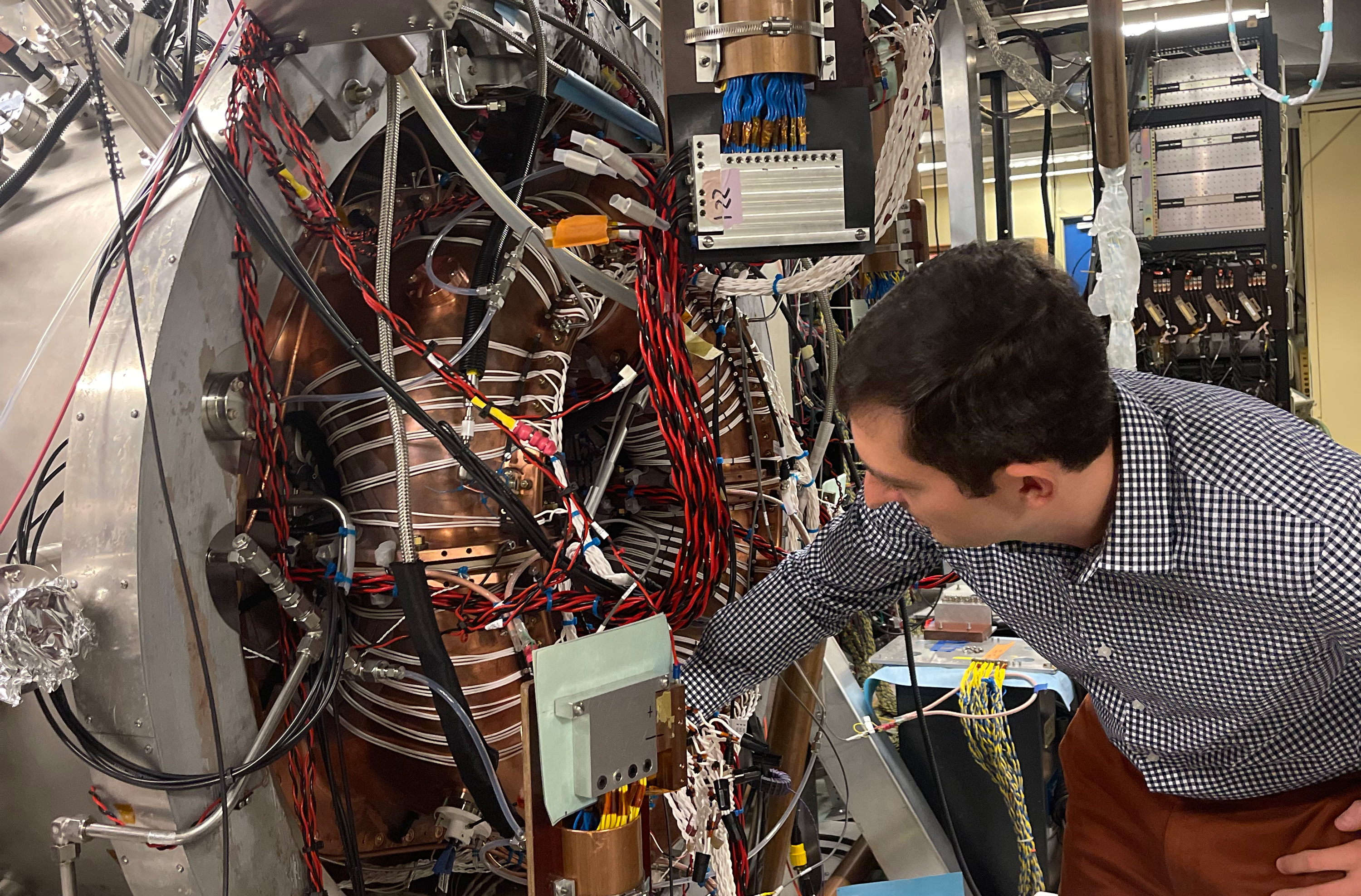 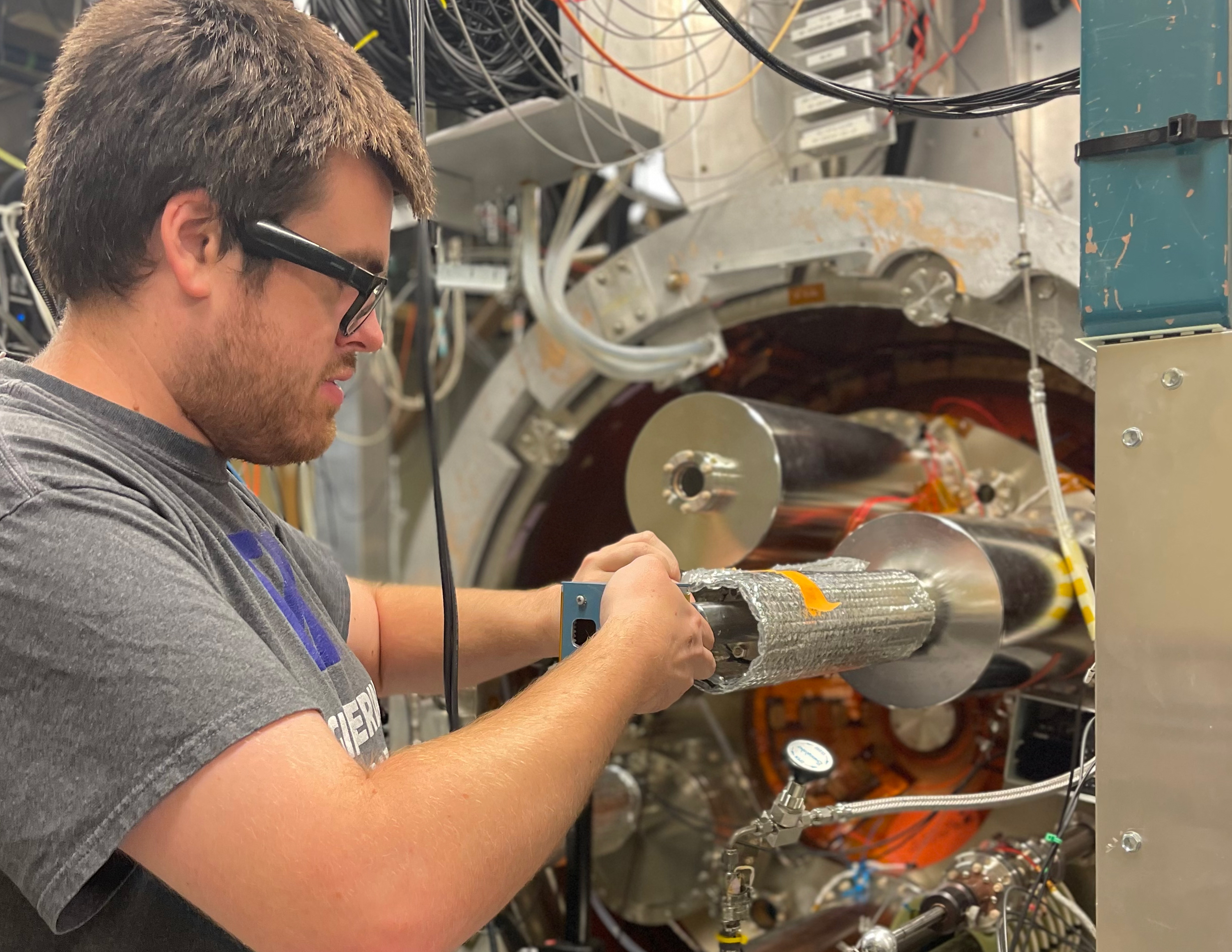 A&A Research Scientists Aaron Hossack (top right) and Kyle Morgan (bottom right) work on the HIT-SIU plasma physics experiment. At left, they demonstrate the laser system which directs infrared and visible beams through the chamber so our researchers can measure the density of the plasma inside. Photo credits: Kenn Curry.

Why all the buzz now?

Hansen: To some extent, we just didn’t have the related technologies that were necessary to make it work 20 years ago. There’s a lot of … new magnetic technologies, new materials, but I think one of the biggest impacts that has not only impacted fusion, but allowed those other technologies to come up too, is just computing.

Our ability to model and move forward on some of these scientific and technological developments because of increased computing power has really been a difference maker. It’s very difficult to make measurements in a fusion reactor because 100 million degrees is pretty hot. So as a result, we really rely on models and computer simulations to interpret and understand some of the things we’re seeing.

As computing has extended, the sophistication of those models has gotten better and we’re really getting to the point where we have a good enough understanding that we feel like we can make some of these big steps again and we feel confident about some of the predictions. And that’s what you see being manifested in the industry’s reinvigoration.

In A&A’s HIT-SI fusion reactor, the spheromak, the plasma forms in three injectors on the device and then these combine and naturally organize into a doughnut-shaped object, like a smoke ring. These plasmas last only a few thousandths of a second, which is why the team needed to have a high-speed method for controlling what’s happening.

Previously, researchers have used slower or less user-friendly technology to program their control systems. So the team turned to an NVIDIA Tesla GPU, which is designed for machine learning applications.

“The GPU gives us access to a huge amount of computing power,” said A&A research scientist Kyle Morgan. “This level of performance was driven by the computer gaming industry and, more recently, machine learning, but this graphics card provides a really great platform for controlling plasmas as well.”

Using the graphics card, the team could fine-tune how plasmas entered the reactor, giving them a more precise view of what’s happening as the plasmas form. This could potentially allow the team to create longer-living plasmas that operate closer to the conditions required for controlled fusion power.

“The biggest difference is for the future,” Chris Hansen said. “This new system lets us try newer, more advanced algorithms that could enable significantly better control, which can open a world of new applications for plasma and fusion technology.”

The HIT-SI Lab’s new set of switching power amplifiers, a $1 million gift from Eagle Harbor Technologies, also helps control the lab’s fusion experiments. Hansen explains, “Our work involves a lot of power – we’re talking 10-20 megawatts – that needs to be released very precisely on microsecond timescales in order to sustain the plasma in a controlled way. We have partnered with Eagle Harbor for many years on their development of precision high-power systems like these that benefit not only our lab but fusion labs around the world. The donation of these prototypes is a major enhancement of our lab.”

The Department of Energy’s ARPA-E program dedicated $2.5 million for the HIT-SI Lab and the Flow Z-pinch Lab to advance A&A’s two different approaches for compact, cost-effective fusion energy. DOE’s interest in fusion is that a commercially-viable nuclear fusion breakthrough promises US energy security with no carbon emissions and no long-lived waste like current fission-based nuclear energy.

DOE’s Office of Fusion Energy Sciences is also funding a collaboration that Hansen is leading with Columbia University’s HBT-EP tokamak that will aid in designing future tokamaks, a leading concept for fusion energy, by understanding the flow of electrical current between the plasma and the wall during normal operations and unplanned shutdowns.

Fusion energy requires maintaining extremely high temperatures, over 100 million degrees Celsius, which requires the plasma fuel to be very well insulated from the walls of the reactor. A tokamak insulates fuel using magnetic fields produced by external electromagnets and a large electrical current, about 1 million times larger than a household outlet, driven in the fuel itself. Even very small fluctuations in the plasma can cause some of this current to flow to the walls, which can produce significant forces and impact the lifetime of the tokamak.

Hansen comments, “This research will improve our ability to predict currents flowing between the plasma fuel and the surrounding walls by validating numerical models developed at the UW with experimental data from Columbia University. Our tools allow us to capture these complex 3D features with the level of fidelity required to advance the design and certification of fusion reactors based on the tokamak concept.”

This research is a collaboration between A&A’s Christopher Hansen and Jeffrey Levesque and the HBT-EP group in the Department of Applied Mathematics & Applied Physics at Columbia University.

Founded in 2017, the Seattle-based startup has built a reactor that can stabilize plasma by using sheared flows — fluid flow caused by forces — versus magnetic fields. The idea is to reduce the cost of and shorten the path to low-carbon commercial fusion energy.

Both the HIT-SI Lab and the Flow Z-Pinch Lab have produced spin off companies, CTFusion and ZaP Energy, respectively, that continue to actively collaborate with the labs. Both labs are working on fusion not only for terrestrial energy, but space propulsion as well since the low-mass, compact devices are a promising fit for long-range spacecraft.

Learn more about the future of fusion energy as a team of researchers are using an AI called deep reinforcement learning to control the magnetic coils of a tokamak.