Hawkmoth video by The Daniel Lab, Department of Biology, University of Washington 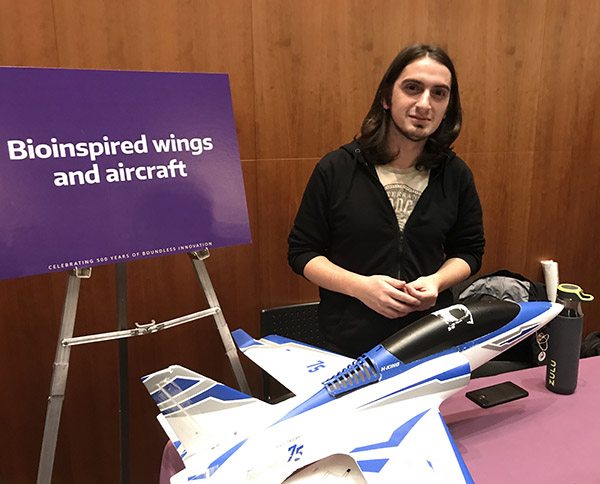 A&A graduate student Burak Boyacıoğlu knows well that living systems inform engineering design. In aerospace systems, achieving agile flight through sensing, processing and computation is one of the ultimate aspirations. That is, how do factors change in an environment, how is that message relayed, and how does the system respond.

The hawkmoth, or Manduca sexta, is a favorite subject for this research because it delivers just that combination. Boyacıoğlu, in collaboration with the UW Department of Biology and in partnership with the Air Force, is researching exactly how the insect senses its surroundings in order to inform the creation of engineered systems that can also sense with such precision.

Bing Brunton, UW biology professor and head of the research collaborative, explains why the hawkmoth is worthy of study. “There are many other flying animals that have been studied in the context of agile flight, including smaller flying insects such as fruit flies and larger flying vertebrates such as birds and bats. However, the hawkmoth occupies a sweet spot because of the accessibility of its invertebrate nervous system and its relatively large size. It is particularly favorable because of the observability of its biomechanics and neural circuitry, having long served as a model system for both aerodynamics and sensing.”

Boyacıoğlu simply says, “Hawkmoths are amazing. They’re extremely good at agile maneuvers and we’re trying to understand how such a small insect can be that clever.” 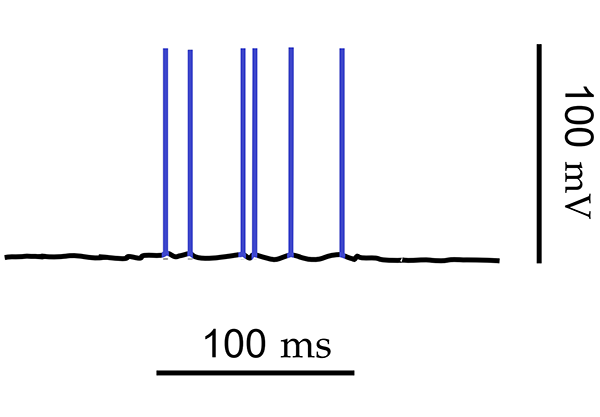 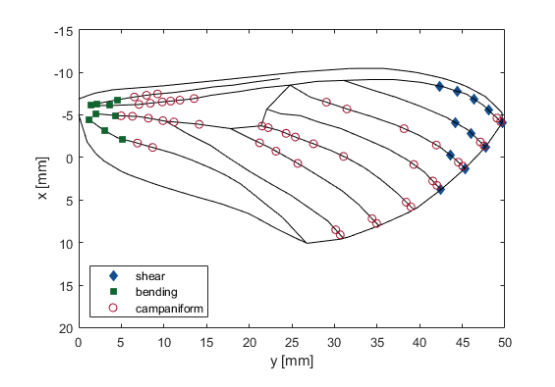 This image represents where the campanilla sensilla are located on a hawkmoth’s wing (red circles) versus the optimal placement to detect shear strain and bending strain as identified in Boyacıoğlu and Morgansen’s research.

Part of the answer lies in the neural sensors on their wings. They can sense slight strain, such as small changes in the air, and adjust quickly.

Neural encoding is the mechanism that filters out “noisy data” to an organism and converts an outside stimulus into a reaction, or what is known in biology as voltage spikes. In this research, observable voltage spikes are assigned a value between 0 or 1 to enter into the data collection to analyze how the hawkmoth is responding.

Boyacıoğlu goes further, “It’s interesting to note that while their eyes also sense their environment, their wing sensors, mechanosensors called campaniform sensilla, deliver a signal at 40 milliseconds, more than twice as fast as an optical signal. Their neural wing sensors are delivering messages with amazing speed.”

This research into neural encoding includes sensing, how the animal perceives its environment, as well as control, how the animal reacts to its environment. Boyacıoğlu’s research focuses on sensing and includes not just how the message gets through, but how the sensors might be placed for better sensing on an engineered craft or vehicle. He uses a mathematical tool called empirical observability Gramians to analyze the system, which is a main research focus of his adviser and A&A Professor and Chair Kristi Morgansen.

An empirical observability Gramian is a numerical method to determine the level of observability in a system. If researchers have specific pieces of information, they may be able to arrive at other pieces. For example, if an object moves, and we can measure its beginning and ending positions and the time elapsed, then we can determine the velocity. However, the opposite is not true; that is, if we know the velocity and the time elapsed, we can’t precisely calculate the beginning and ending locations even though we may have witnessed it. Empirical Gramians help us figure out how observable the system precisely when the system can be quite complicated.

Morgansen explains, “The trick is to make sure that you’re getting the most and best information in the system so that you have the ability to quickly change in response. We need to know if we are interpreting the sensing system adequately to get the information we want. Burak’s work is to see if we can observe what the hawkmoth is experiencing and how it reacts to that.”

In trying to replicate the hawkmoth’s sensing, Boyacıoğlu is analyzing where to place sensors on engineered systems such as unmanned aerial vehicles (UAVs), aircraft and more. He says, “The hawkmoth’s sensor positions are informative, but tweaks need to be made for optimal sensing in our systems. This is a great iterative process from biology to engineering.”

This research is funded by the Air Force Office of Scientific Research in collaboration with MIT and Carnegie Mellon through the Multidisciplinary University Research Initiative on Neural-Inspired Sparse Sensing and Control for Agile Flight. “Bioinspired Observability Analysis Tools for Deterministic Systems with Memory in Flight Applications” by Boyacıoğlu and Morgansen will be presented at SciTech in January 2021.

The NDCL has a new website and url. Visit it at https://sites.uw.edu/ndcl/.