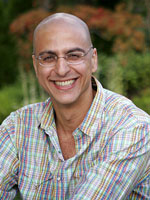 Mehran Mesbahi graduated from the University of Southern California in June of 1996. From July of 1996 until December of 1999, he was with the Guidance and Control Analysis Group of the Jet Propulsion Laboratory at California Institute of Technology. During this time, he also had appointments in the Department of Electrical Engineering- Systems at USC (1997-1998) and in the Department of Control and Dynamical Systems at Caltech (1998-1999). From January of 2000 to July of 2002, he was an Assistant Professor of Aerospace Engineering and Mechanics at the University of Minnesota-Twin Cities. In the summer of 2002, Professor Mesbahi joined the Department of Aeronautics and Astronautics at the University of Washington.

Nailing the landings in space

A&A is solving the challenges of how and where to land on the Moon, Mars and beyond.

Mehran Mesbahi receives this honor for excellence in educational innovation and curriculum development.

The Husky 100 recognizes 100 UW students who are making the most of their time at the UW.

Researchers show us what we gain by applying optimization algorithms to the iconic mission.