The advantage of plasma thrusters over traditional chemical thrusters for space propulsion lies in the fact that plasma thrusters have a much higher exhaust velocity than chemical thrusters. This means a much higher acceleration can be achieved for a given amount of fuel. When one considers the propellant/payload mass ratio of typical space missions, the attractiveness of plasma propulsion becomes clear. However, current thruster technology is limited in the amount of power that can be processed into thrust, and with the accelerating development of high power space systems a new type of high power plasma thruster will soon be needed.

The goal of the Electrodeless Lorentz Force Thruster (ELF) program is to develop a new type of plasma thruster that is capable of efficiently accelerating virtually any type of propellant to high velocities (10000-40000 m/s), and is capable of high power operation (>100 kW). It's simple electrodeless design is inherently lightweight with a virtually limitless operation lifetime.

ELF utilizes Rotating Magnetic Field (RMF) current drive to ionize neutral gas and drive an azimuthal current to form a Field Reversed Configuration (FRC) in a conical geometry. An FRC is a structure of magnetized plasma with a closed, toroidal magnetic topology. As the FRC grows, it compresses an axial DC field against electrically conductive rings in the walls of the thruster body. This magnetic pressure accelerates the FRC along the axis and out the mouth of thruster. As the FRC translates, it expands converting thermal energy into thrust. This process can be repeated roughly every millisecond giving the perception of constant thrust. 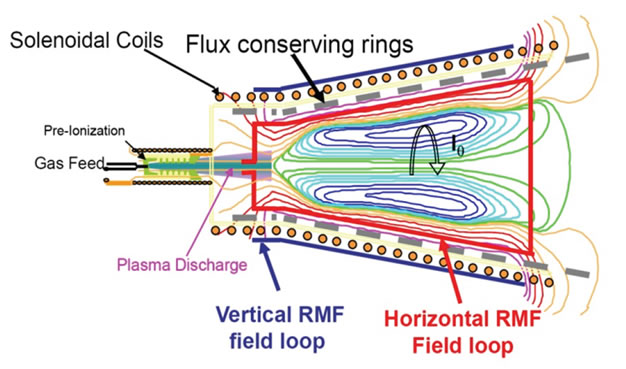 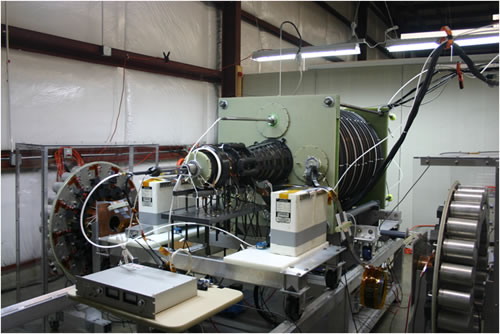