Aircraft icing has been an active area of research for many years; however, the vast majority of research has focused on iced airfoil aerodynamics. We are currently in the early stages of a multiyear program to study the effects of ice on three dimensional swept wings. A swept wing model, representative of a typical commercial airliner wing, has been built and is being tested in the UIUC wind tunnel in order to develop the necessary experimental methods to properly study the effects of ice on swept wings. Methods currently being used include force balance measurements, surface pressure measurements, wake surveys using hot wires and five-hole probes, pressure sensitive paint, surface oil flow visualization and smoke flow visualization. In addition to developing an understanding of swept wing flowfields the long term goal is to develop an efficient testing program and implement this program at larger wind tunnels (such as ONERA’s F1 Tunnel). The tests at the larger wind tunnels will be used to create a database of experimental measurements for swept wings with ice accretions at high Reynolds number. In addition to creating this database, we also hope to determine the ice shape features that are critical to the performance of swept wings to aid in future simulations. 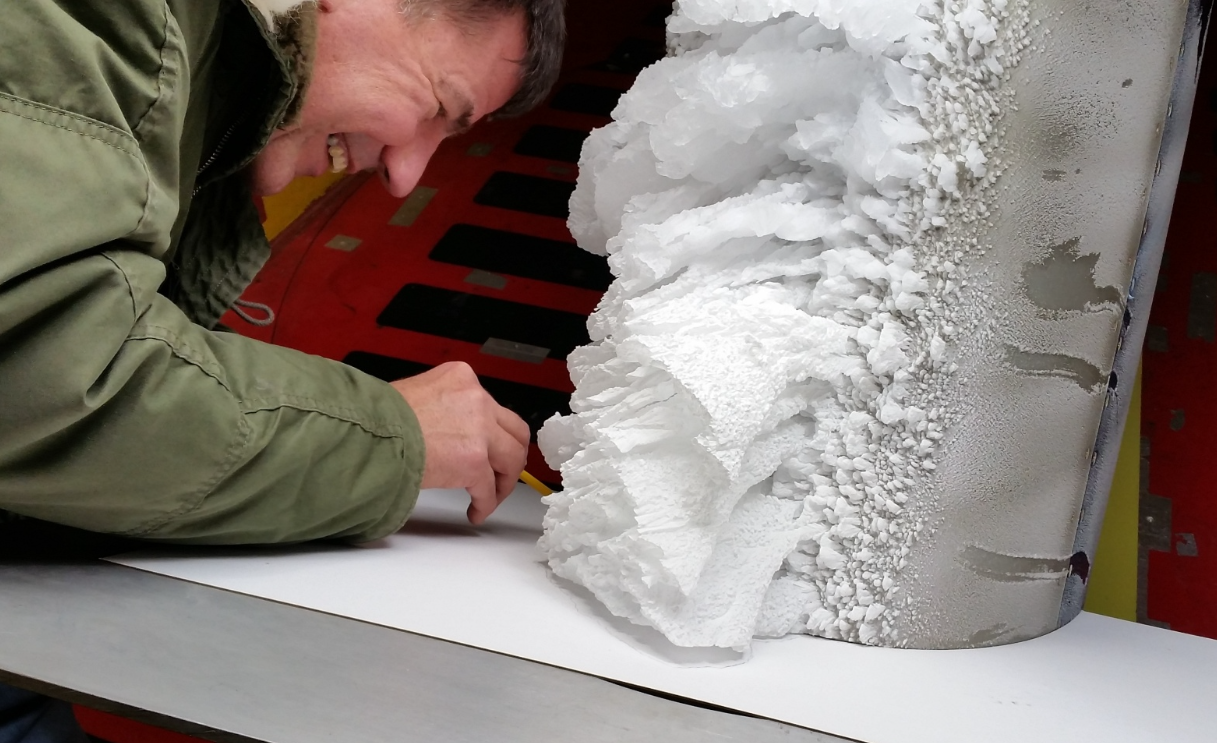 A new testbed aircraft will be developed from an existing conventional airframe and provide a dedicated platform to study, design, and test electrically powered propulsion systems for use in commercial and general aviation vehicles and UAV systems. The aircraft will allow various electrical propulsion system technologies to be tested to determine performance, reliability, safety, and cost. These include various battery, fuel cell, super capacitor, and motor technologies. Additionally, the new aircraft could be used to study energy-harvesting solutions including photovoltaics, vortex energy extraction, and piezoelectrics. The overall technical objective of the Phase I project is to perform a multidisciplinary analysis of the various aircraft available to be purchased and those available at the NASA Dryden Flight Research Center to determine which vehicle would provide the most desirable and versatile testbed for electric aircraft propulsion. This testbed will provide a modular system capable of testing the widest range of components and architectures in a cost effective and timely manner.

The objective of this research is to quantify the relation between aircraft stall and aerodynamic performance, with particular interest given to changes in control surface hinge moment. The envelope protection system will be designed in such a fashion to predict stall under clean, iced, damaged, and other flow-inhibited conditions. Thus, this system could potentially provide warnings of unexpected, premature stall to a pilot, who could then take corrective action. Wind tunnel testing at UIUC will be performed to obtain airfoil aerodynamic performance measurements under various conditions of airfoil contamination. Analysis will then be continued at UIUC and Rolling Hills Research Corporation.

Due to current FAA regulations, which limit civilian jets to subsonic speeds, Gulfstream Aerospace Corporation has proposed an engine nacelle design aimed at reducing the sonic boom signature of the propulsion system. The external engine profile, which has a large protuberance (due to a gearbox and other engine hardware) that contributes greatly to the noise signature, is circularized by wrapping an external cowling around the entire engine. This allows for a more uniform external profile. Tip radial defected flow, originating from the supersonic inlet, is diverted into the nacelle-bypass that is formed between the core turbofan and the new cowling. A fairing is used to divert the nacelle-bypass flow around the gearbox, leading to a highly complex, 3D internal flow. This experiment studies the flow that passes through the aft portion of the nacelle-bypass, where, with the aid of thick guide vanes, the flow is redistributed to a fully annular cross-section and reaccelerated to supersonic conditions. The experiment is conducted in an axisymmetric supersonic wind tunnel located at UIUC at approximately 6% scale. Experimental data comes mainly in the form of static pressures within the model and total pressure measurements at the inlet and exit of the model.

The purpose of this research is to use pressure sensitive paint techniques to visualize pressure distributions and characterize flows over 3-D wings with ice shapes. Pressure sensitive paint provides continuous pressure measurements, which are advantageous when compared to discrete surface pressure taps. The current work focuses on using this method on a 3-D swept wing with a leading edge ice shape and testing this model in the UIUC wind tunnel. These tests will determine the effectiveness of this method for 3-D icing applications at low speed, and will aim to obtain quantitative pressure distribution data for the model. Additionally, this method will enable flow characteristics such as separation bubbles, leading edge vortices, and trailing edge separation to be analyzed visually.

Performance of an Airfoil with a Power-saving, Tab-assisted Flap System

M.B. Bragg and J. Bottalla
Funded By: The Boeing Company

Active control methods, such as servo tabs, have already been implemented on aircraft such as the Boeing 707 and 727. For next generation air vehicles, such as the blended-wing body aircraft, an active-control tab-assisted control surface would be an effective method of reducing flight control power requirements and thermal impact, but would require a more complex method of application than that previously used or studied. The initial wind-tunnel experiment served as a preliminary verification of the power-savings capability of a tab-assisted flap and of a computational fluid dynamic (CFD) analysis. Furthermore, methods of independent flap and tab movement were analyzed and optimized for continued use in the realistic simulation or dynamic phase of the experiment. The second phase, or dynamic simulation phase, will simulate the proposed mode of operation providing validation of math-model simulations and lead the way to an in-flight application.

Due to current FAA regulations, which limit civilian jets to subsonic speeds, Gulfstream Aerospace Corporation has proposed an engine nacelle design aimed at reducing the sonic boom signature of the engine housing. This continuing experimental research focuses on the integration of guide vanes within the bypass region in order to investigate their effect on subsonic annular flow around a circumferential blockage. After upgrading the existing wind tunnel facility to accommodate the design inlet Mach number, experimental flow analysis is aimed at characterizing the complex flow regime, validating computational models, and providing insight into techniques that may improve the flow characteristics within the bypass region. A notable feature of the axisymmetric test section used in this experiment is its ability to rotate, which allows for detailed analysis of both radial and circumferential boundary layer and shear layer profiles. Results of this research will also be used to define inlet boundary conditions for the supersonic bypass flow experiment.

Sonic boom attenuation is a considerable design challenge to enable civilian aircraft to operate at supersonic flight conditions. One technology proposed by Gulfstream Aerospace for the production of low-noise supersonic aircraft is the high-flow nacelle bypass concept in which an outer nacelle surface is used to encircle the asymmetric external engine protuberances of a traditional turbine engine. Although this bypass flow may reduce the overall sonic boom signature of the vehicle, the engine mechanics and mounting create a highly complex 3-D flow in the annular bypass region. To better understand the 3-D flow features, an approximately 1/6th engine model is tested in a newly constructed axisymmetric subsonic wind tunnel to simulate the bypass flow path. Pressure measurements were taken over a range of circumferential angles and radial positions to investigate characteristics of the fundamental steady state annulus flow such as pressure losses and flow uniformity.

Understanding the relationship between ice accretion geometry and the resulting aerodynamic penalty is important for many applications, including establishing procedures to determine the most critical ice accretion shape for aircraft certification. Research is being conducted under this grant to improve our ability to accurately measure and predict airfoil performance with simulated ice. The presence of the simulated ice causes large regions of unsteady separated flow that make measurement of the aerodynamic performance and computational predictions difficult. First, this study is using detailed measurements of the turbulent wake and a reevaluation of the wake-survey method to improve wake measurement for airfoils with large unsteady wakes. Unsteady pressure measurements and PIV techniques are being used to understand the flowfield over an iced airfoil near stall including the 2-D and 3-D characteristics.

The objective of this research is to develop accurate aerodynamic simulations of ice accretions for aircraft within a known uncertainty. Currently aircraft certification and other tests use various means to simulate ice accretion, many of which are not well documented. This research will identify the critical physics for ice accretion aerodynamics and propose simulation methods based on an understanding of the dominant ice shape/flowfield features. Wind tunnel testing in three different facilities will be used at NASA, ONERA, and Illinois in conjunction with CFD studies to develop and validate the simulation methods. Results from this research will also be used to define the fidelity needed when simulating complex 3-D ice features when performing CFD modeling or computational ice accretion methods.

Unsteady Flow about an Iced Airfoil

The prediction of the aerodynamic performance of airfoils and wings with ice accretion is complicated by the unsteady flow that exists near maximum lift. A major feature of this flow is the large separation bubble that occurs aft of the leading-edge ice horn. This experimental study will characterize the unsteady behavior of this bubble using a specially constructed wind tunnel model. High-response pressures and unsteady forces while PIV, surface hot films, and hot wires in the flowfield will provide information on flow reattachment and details of the vortex structures.

The objective of this research is to use experimental data to determine the relationship and sensitivity of iced-airfoil performance to icing cloud parameters. This study will use ice shape tracings taken from a previous study produced by NASA. These ice shapes will be recreated as SLA models to be tested in the UIUC subsonic wind tunnel. Results of this research will also be used to link measurable or significant aircraft safety changes to the underlying changes in airfoil aerodynamic performance.

A 3-D Navier-Stokes methodology is used to investigate the effects of ice-shaped protuberances on airfoil aerodynamics. The separated flow regions are studied by both steady and unsteady approaches. Results indicate that large changes in the drag, lift, aerodynamic moment, and pressure distributions can occur for upper surface ice shapes with sizes on the order of 1% of the chord length.

Flow control can be used to enhance turbulent boundary layer attachment and enable longer runs of laminar flow on highly optimized low-drag airfoils. Airfoils are designed and tested to develop this capability.