In its sixth year at the UW, the Husky Robotics team has turned its attention inward. By focusing on creating a solid foundation, the team hopes to set future generations of UW student roboticists on a path to success. 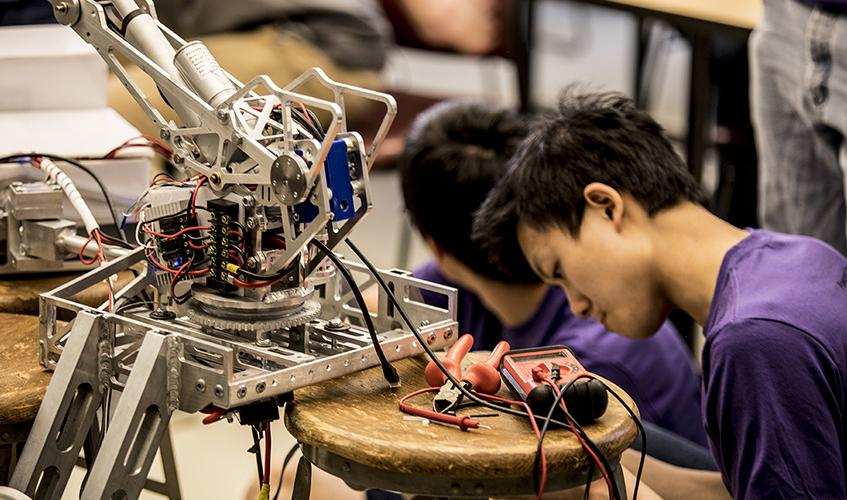 In August 2012, a NASA rover landed on Mars and immediately went to work collecting and testing soil, rock and atmospheric samples. As its mission unfolded into 2013, Americans began to get to know this robot, fittingly named Curiosity, and, because of its journey, joined scientists in exploring the Red Planet from their televisions, laptops and mobile devices.

That same year, the UW’s Husky Robotics team decided to build a Mars rover of its own to enter into the University Rover Challenge. Organized by the Mars Society, this competition invites student teams from across the globe to design and build remote-controlled Mars rovers — space exploration vehicles, like Curiosity, created to explore the surface of a distant planet. The teams then compete their rovers in simulated Mars colony missions at the Mars Society’s desert research station in Hanksville, Utah. 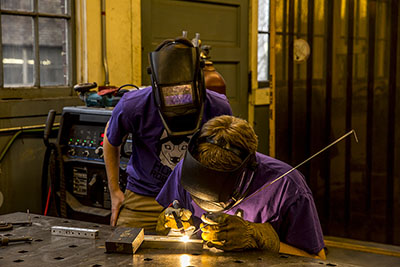 Not only was the UW team new to the competition, they were also relatively new on campus, having only come together the previous year. Evolving from a small group of students who shared an interest in robots and met under the name Dawg Bytes, the team changed its name to Husky Robotics and shifted its focus from working on a handful of small-scale robotics projects to a more formal, singular goal: creating a competition-grade rover.

The team impressed the judges with one of their early entries: Hydra, a novel treaded tank with pneumatic suspension. Though limited in sensing and controls, Hydra was faster and more powerful than most other rovers in the competition were, and judges commended its unique mechanical design. This encouragement prompted Husky Robotics to deepen and expand its work. Every summer since then, the team has competed rovers — with an emphasis on mechanically innovative designs — in the challenge.

Strengthening a multi-disciplinary approach and structure

“Robotics is basically the integration of software, hardware and electronics,” says ME graduate student Ben Estroff, who serves this year as Husky Robotics’ public relations lead. “Our team values and practices a multi-disciplinary approach, and our members come from many engineering departments — ME, CSE, EE and AA, to name a few.”

Since its earliest days, the team has experienced rapid growth. Now with a core membership of about 75 students, team leaders have decided to turn their attention inward.

According to Estroff, the team determined it needed a more focused plan for member recruitment and retention, as well as training, skills building and knowledge transfer, so leadership has been working to establish a secure infrastructure for the team. In the last year, they have restructured workflow and written a new constitution to define roles and document policies, procedures and team history. They have adapted project management skills and practices that team members have learned through internships, and they have been working to expand their profile on campus, by participating in events like Engineering Discovery Days and launching a new website. And a few months ago they began working with a new faculty adviser, ME assistant professor Sawyer Fuller. 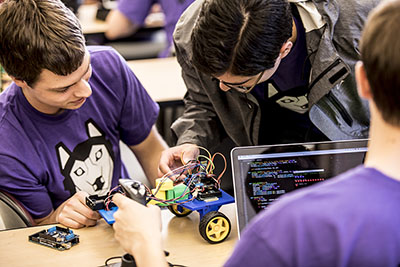 Team members Nathan Wreggit and Sebastian Castellanos work on a mini-rover to develop driving code before the chassis is completed.

“I've long been very excited about the mission of the Mars Society, human exploration and colonization of Mars, and I'm hoping that my research in robotics will be able to contribute to this area in the future,” Fuller says. “Since the team is involved with two things I’m really excited about — robotics and Mars exploration — how could I say no when asked to serve as their new adviser?”

Fuller, who researches in the areas of insectoid robotics and biologically-inspired sensors, controls and design, hopes to help the team by providing stability and perspective. He says that he is looking forward to seeing the solutions the team comes up with for the technical challenges of this year’s Mars Society Challenge.

Approximately 80 teams applied for the upcoming 2017 University Rover Challenge, and Husky Robotics is one of 36 teams from seven countries that has been invited to participate in the competition. With a new design and approach this year, the team hopes to make another lasting impression on the judges.

Keep up with Husky Robotics at huskyrobotics.me.