Doctoral student Isabella Rieco from A&A’s SPACE Lab is the recipient of the 2022 Varanasi Endowed Fellowship. 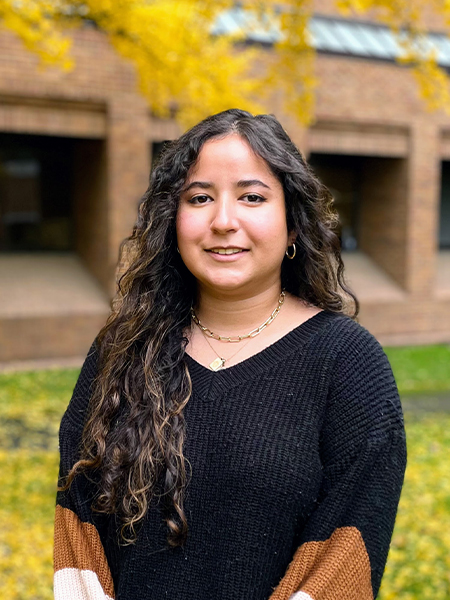 A&A doctoral student Isabella Rieco is the new recipient of the Varanasi Endowed Fellowship, established by Rao (Ph.D ‘68) and Usha Varanasi (Ph.D. Chemistry ‘68) to help support A&A students with academic merit in our graduate program. Rao and Usha are well-known at the UW for their service to our programs. In 2017, they were named UW Laureates. In 2019, Rao was named the A&A Distinguished Alumnus, and in 2022, the College jointly awarded them the 2022 Diamond Award for Distinguished Service.

Individually, Rao and Usha have brought their expertise to the UW as volunteers and mentors. Rao, former chief engineer for structures of the commercial airplanes division at Boeing, is one of our affiliate professors and a member of our External Advisory Board. In these roles, he has contributed to student curricula and strategic goals for future growth. He has also served as a mentor to several A&A students.

Usha, formerly the director of NOAA’s Northwest Fisheries Science Center, held affiliate professor positions in the chemistry department, the School of Aquatic and Fishery Sciences and the School of Law, and served on boards for the College of the Environment and the College of Arts & Sciences.

Isabella is a member of A&A’s SPACE Lab which advances electric propulsion. Her research focuses on 1D erosion modeling of magnetically shielded Hall thrusters. A by-product to any engine or thruster is erosion of its parts. Isabella will experiment on making small changes in the thruster design to manage erosion to increase the lifetime of thrusters in the future, allowing us to have farther and more advanced missions into space.