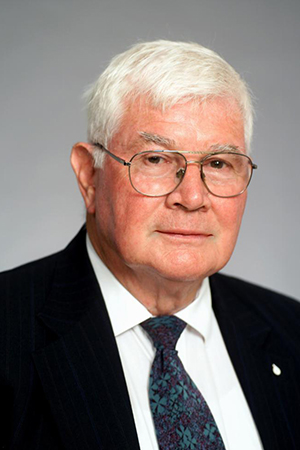 While deployed to The Defense Advanced Research Projects Agency in 1977, Col. Nicolai designed and developed the Advanced Cruise Missile (code name TEAL DAWN). The full-scale design was developed by Convair, San Diego. The ACM program was transferred to the Air Force in 1982 as the AGM-129A and was recognized officially in 1988. Convair produced 460 ACMs and none were ever launched in conflict.

As an educator, Dr. Nicolai conducted a five-day aircraft design short course for 25 years and a 15 week aircraft design course as part of the Lockheed Martin Aeronautics Technical Institute for 30 years. Over 2000 practicing engineers went through the two programs. Dr. Nicolai has visited over 20 schools in the last three decades for lectures, design reviews, seminars, and speeches. He has written four text books on aircraft design, three of which are used in US universities, and he holds 9 patents.

Dr. Nicolai received his BS from A&A in 1957. He completed a master’s degree at the  University of Oklahoma in 1962 and a PhD at the University of Michigan in 1968, He also earned an MBA from Auburn University in 1976.