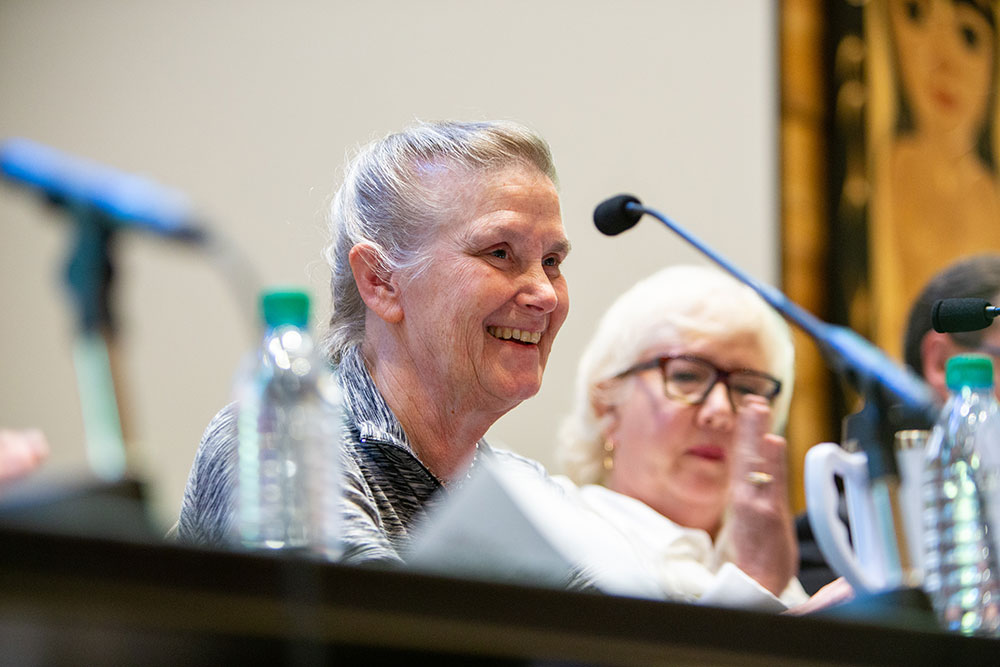 Gale at the UW centennial celebration of aeronautics instruction in 2018.

I knew 30 seconds into my Zoom interview of 2021 A&A Distinguished Alumna Anita Gale, that I was about to have a very interesting conversation. She started out describing the thrill of teaching someone sailboat racing in a J24 boat, a passion she and her late husband Dick Edwards developed together. She says, “That boat is the perfect size for newcomers. At 24-feet-long, with three people who know how to operate the boat well, you can invite two more who can follow instructions to join the team. That means you can have absolute novices racing a sailboat on their first day out!”

Her alacrity for giving people new and amazing life experiences does not escape other people. “Anita Gale has such an amazing spirit, and she is eager to create unique experiences for high school students, college students, and life-long learners,” says A&A Chair Kristi Morgansen. “Our A&A community would not only like to recognize her career accomplishments, but her generosity of spirit and her enthusiasm. And as a woman in aerospace,” she continued, “I have long looked to Anita, who was a pioneer in the US space program and an inspiration to the women in the field after her.”

A clear and early interest in space 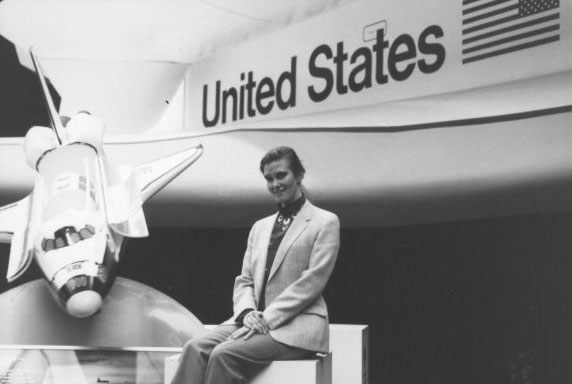 Anita Gale in 1986 during her work for the Space Shuttle program.

Anita entered UW Engineering in the fall of 1969, right after Apollo 11. But her interest in space emerged well before then. Sputnik fascinated her in 1957 and the Mercury missions after that. In the third grade, she was reading Jules Verne’s From the Earth to the Moon and the Buck Rogers comics.

“I was following it all,” she reports. “My family subscribed to Look magazine which had exclusive stories on the Apollo astronauts. I followed Alan Shepard and Gus Grissom. Then there was Valentina Tereshkova, the first woman in space in 1963! I followed the feats of Chuck Yeager and Scott Crossfield. I followed it all!” 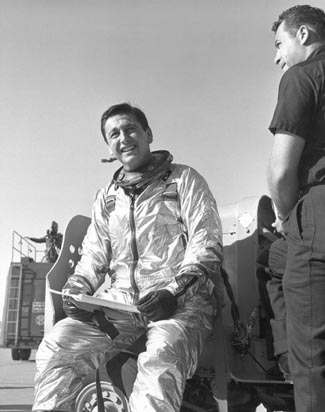 Scott Crossfield, an inspiration to Anita Gale and the 1986 recipient of the A&A Distinguished Alumnus award (BSAA 1946, MSAA 1947), was the first pilot to fly twice the speed of sound in 1953. He was also a consultant to the House Committee on Science and Technology. He joined NACA after graduation. At North American Aviation, he was involved in all phases of the X-15 project, flew the checkout flights, and reached Mach 3. He was later a technical director at North American, and he served as division vice president at eastern Airlines. Crossfield's many honors include presentation of the Harmon and Collier Trophies by President Kennedy, and induction into the National Aviation Hall of Fame.

Then, in the ninth grade at Tillicum High School in Bellevue, WA, Gale took an aptitude test “probably out of the University of Washington” as she remembers. “The results came back, and that was the first time I saw the words ‘aeronautical’ and ‘engineer’ put together,” she says.

Seeing that the UW offered aeronautics and astronautics, she laid out her path to the department. She kept her grades up and her plans quiet from her high school counselors so they would not discourage her and steer her into more “traditional” paths for women. By the time she entered the College of Engineering as a freshmen, she was one of a handful and when she entered the A&A department, she was the only woman in her cohort.

Gale graduated in 1973, but stayed to get her masters due to the bottoming out of the aerospace industry. By 1974 and armed with a masters degree, the market was up again, and she entered the Space Shuttle Program with Rockwell International. Though she switched organizations a few times, she spent most of her career working on the Space Shuttle program, working on payload and cargo integration. She co-owns three US patents on launch vehicle payload interface standardization and cargo containerization. She left Rockwell in 1978 for Aerojet Electro-Systems. Then in 1980 she moved back to Rockwell and ultimately she became a Boeing employee with its acquisition of Rockwell in 1996.

Gale is pretty clear about “the times” of her career. She was often the “first woman, only woman, most vintage woman” in her divisions. She trained herself to ignore a lot from bosses and coworkers. And she excelled in not only doing difficult jobs, but made it a point to do them better than anyone else would. She remembered a time at Rockwell when they were transferring locations from California to Houston. She worked tirelessly on the tedious process of documenting processes for the transition and wound up setting up a system that was well beyond ISO compliant.

Gale has dedicated herself to service at many points in her career and recommends it for several benefits. She ran the Society of Women Engineers Convention in 1981 and gained a lot of management experience from that. She managed over 100 volunteers and managed $250,000 coming through the convention budget. She says, “While these conferences are now centrally run, there is a lot of value in throwing yourself into the technical societies and gaining experience that does not have the same stakes of trying out management in a major company.”

“And you never know where these things will take you,” Gale says. A small project with her husband and a colleague to set up a competition for Explorer Scouts in 1984 has led to a major effort, the annual Space Settlement Design Competition, that Gale now runs that annually reaches over 1000 high school students around the world approaching the challenges we face with establishing human habitation in space.

She has embraced being open to where these things have led her. “You need to be open. If something is pulling you to do something philanthropic, embrace the opportunity. Part of being human is to enrich the experiences in the lives of others.”

Gale retired from the Boeing Commercial Crew program in 2016. She was completing her work on schedule, then the schedule slipped and she found she would have nothing to do for a year and a half. That just means she puts more time into volunteer pursuits. Space Settlement Design Competitions are expanding to reach more students, she was recently elected CEO of the National Space Society, and now she goes on a Grand Canyon raft trip every year.

So for her career accomplishments and the great works she has done for students, we congratulate Anita Gale on her selection as the 2021 A&A Distinguished Alum.