Civil and environmental engineering and A&A adjunct assistant professor David Shean has pioneered new techniques to measure changes in glaciers. He combined old spy satellite images and modern satellites to create time-lapse 3D maps as one method to study what has happened over the past 50 years. In 2014, he saw the potential of using drones to collect detailed, overlapping photos of glacier surfaces to map changes with accuracy of better than 1-2 inches.

But to really find out what is going on beneath the surface of a glacier and to precisely measure the total water content of seasonal snowpack, researchers like Shean use a technique known as Ground Penetrating Radar (GPR). GPR works like sonar - an antenna sends a radar “chirp” into the snowpack. Another antenna precisely measures how long it takes for the chirp to travel through the snow and bounce off of the underlying ground (or ice). The total travel time can then be converted to depth.

David Shean on why snowpack matters: “Glaciers work like a bank account - winter snow is the annual deposit, and summer melt is the annual withdrawal. If the two add up, the account is balanced, but if there is less snow or more melt, then you have a deficit, and the glacier retreats. We need to measure snow to understand how glaciers are changing today. We're glacier accountants.”

Shean describes the current challenges of field work in the mountains with GPR, “We collect data by dragging the GPR instrument around on skis. It’s obviously not an ideal situation as we’re near crevasses, beneath avalanche hazards, and going up and down steep slopes.”

He notes that the U.S. Geological Survey uses the same instrument to collect data over glaciers in Alaska, but they mount it on the skids of a manned helicopter and ask the pilots to fly as low as possible over rugged mountain terrain for hours. With GPR, the closer you are to the ground, the deeper down into the subsurface you can collect data.

In Antarctica, GPR devices have been attached to autonomous ground vehicles (“rovers”), eliminating the need for a helicopter pilot and bringing it close to the ground, but this is not without risks. As Shean notes, “If you roll into that crevasse, then that’s it, your expensive equipment and precious data are gone.” 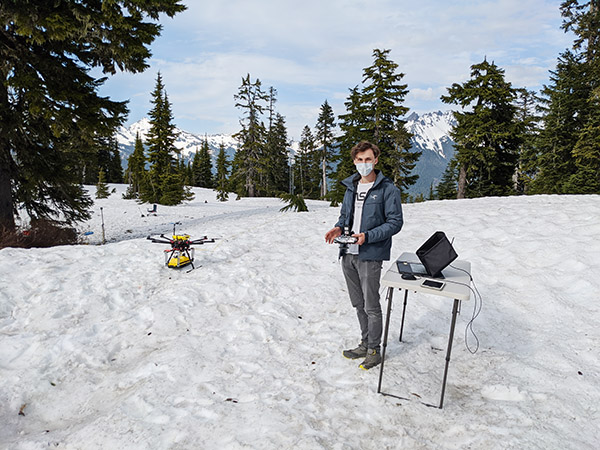 Chris Hayner at the “command center” getting ready for the next test flight. 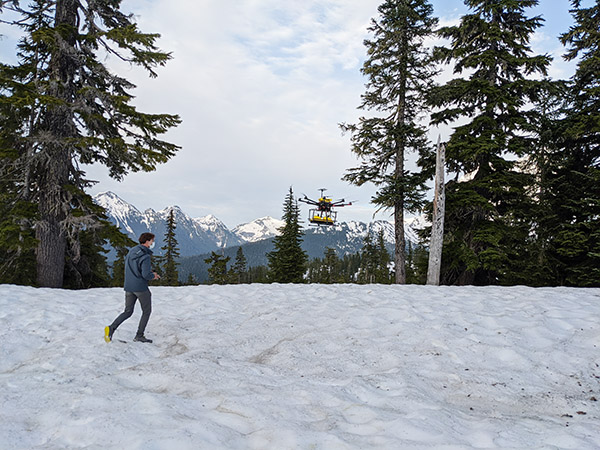 Partnering on a drone-based solution

The idea of mounting the GPR equipment on a drone was naturally appealing after success with the camera surveys over glaciers. And a drone would be able to keep the scientists and their equipment safe while also flying lower than a helicopter to see deeper into the snow and ice. Shean contacted professor Christopher Lum who was then head of A&A’s Autonomous Flight Systems Lab (AFSL), and they hatched a partnership to outfit a drone with GPR.

The work started with designing a system to attach the unwieldy GPR equipment to “Argo,” a large student-built octocopter drone that had been sitting idle in the lab for a few years.

AFSL’s Chris Hayner, a UW physics student pursuing an A&A minor, was eager for the challenge. He says, “It’s more than just attaching the GPR to a drone. We have to reconfigure compasses, antennas and sensors, reprogram software with the new configurations, rewire the drone to accommodate the new parts, design appropriate bracing systems and keep an eye on the weight of the entire system. And then there’s all of the troubleshooting with such an intricate system.”

He also built on previous work by former A&A master’s student Brian Katona designing brackets that would stabilize the system and buffer it properly in case of a hard landing.

The team tested Argo in A&A’s Bowman facility right before the COVID-19 pandemic shut down access to the facility in March. Argo crash-landed several times, leading the team to reexamine wiring configurations, sensors and soldering connections.

The Argo endured several crashes during test flights. This dramatic drop was caused by a strong current flow that melted a soldering connection.

After pandemic delays, a long-awaited test flight over snow

Ideally, an April expedition would capture the deepest snowpack on the local glaciers. But with the governor’s stay-at-home order this spring, the opportunities to test Argo with a decent snowpack were dwindling. After performing a final round of test flights and receiving permission from the UW to carry out time-sensitive in-person research, Shean and Hayner were finally able to test the newly-outfitted Argo in late May on Mount Baker.

All of the test flights paid off as Argo flew smoothly out on the mountain. The system successfully collected GPR data that clearly measured the total snow depth and showed detailed layers in the snowpack. They also tested different flight configurations, and discovered that operating the drone in short hops versus a long continuous flight would preserve battery power. 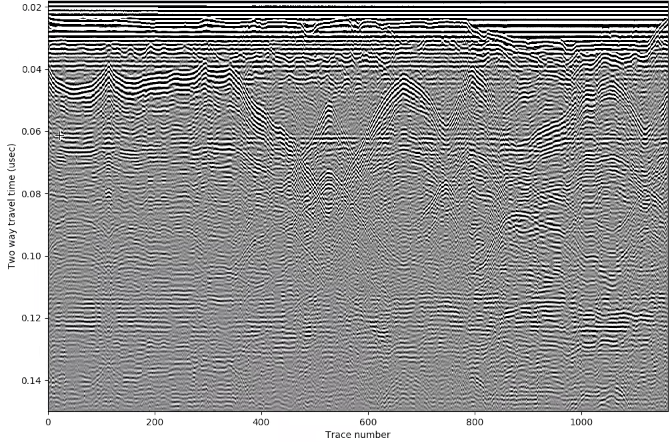 An image from the ground penetrating radar, showing the snowpack layers on top of terrain.

Next steps will be to integrate the system with drone models offering improved battery life and tuning the system for longer, autonomous mapping missions over hazardous terrain. In the meantime, Shean looks forward to collecting more data using drones for his research measuring seasonal snow and understanding ongoing glacier change.

Glaciers across time: Groundbreaking cloud computing at UW measures how glaciers respond to climate change
Mountain glaciers shrinking across the West
Hide and seek: Building a drone-based machine learning dataset to save lives
Structure from Motion