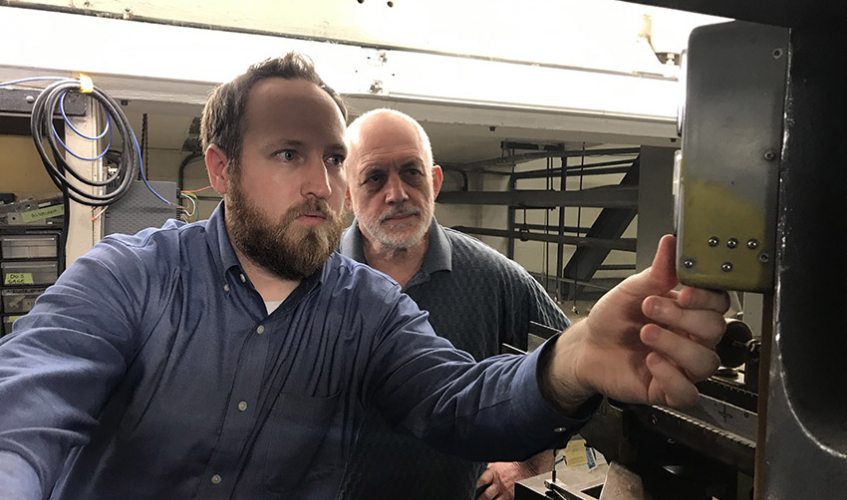 Matt Hudgins and Carl Knowlen perform a balance calibration to ensure the most accurate data for customers.

In the summer of 2017, during Professor Carl Knowlen’s first week on the job leading operations at the Kirsten Wind Tunnel, Seattle had a soaking rain. The roof leaked, resulting in water dripping onto some of the data acquisition system (DAQ) components that read all of the data for the wind tunnel.

The DAQ started having some performance issues, giving the student crew more experience in troubleshooting and fixing on the fly. While it worked well enough, customers wanted a new DAQ that could accommodate their needs more precisely with new technologies they were including in their models. This old DAQ, which was installed in 2000, could not interface with the latest testing components and criteria.

Customers don’t have to wait any longer. With funding solely from testing revenues, the KWT is now integrating and validating a new DAQ that will accommodate wind tunnel testing needs for the next decade. KWT Test Engineer Matt Hudgins reports, “This new DAQ is providing changes that customers wanted to see. The customers are incorporating more sensors, configurations, and data channels, higher sampling frequencies, and styles of testing that we couldn’t accommodate before. They are now able to set up more easily in our wind tunnel because our system can now interface with their test models more fully.”

The hiring of Hudgins himself was a recent improvement to the KWT. Knowlen explains, “KWT is unique in that its primary operations are executed by undergraduate student employees from different departments. While the crew is experienced and adept, having a professional engineer on staff is useful for their deeper development and mentorship, and this is what Matt is providing.”

Keeping the KWT updated is important. Not only is it the only commercial wind tunnel in the Northwest, but it is only one of four university wind tunnels in the United States, and the only one operated almost exclusively by undergraduate students.

"With this DAQ upgrade, we will be seeing more direct Boeing activity, which gives students a wider range of projects and a closer connection to local industry." – Carl Knowlen

As Knowlen points out the importance for the UW: “We’re a legacy asset. We’ve been in operation since 1939. At one point, every Boeing aircraft was tested in this wind tunnel. That ended in the 1990s as the aerospace industry shifted, but we now work with many subsidiary providers to Boeing. With this DAQ upgrade, we will be seeing more direct Boeing activity, which gives students a wider range of projects and a closer connection to local industry.”

The transition to the new DAQ takes some time. The old and new systems will run in parallel for about six months to make sure all six computers tied into the DAQ are synchronized, using a new GPS timing device. “We have to make sure the DAQ software has access to all necessary drivers and subroutines on different platforms and that the PCs are talking to each other correctly over a wide range of test configurations,” comments Knowlen. Knowlen gives a nod to the student crew for making the time that led up to the transition as smooth as it was. “The students, especially the three seniors who graduated last year and the eight seniors currently employed, kept wind tunnel operations on track and stepped up to learn how to do test engineering tasks that were above and beyond their job descriptions.”

Jess Grant, A&A senior and KWT crew chief, acknowledged the rigorous problem solving aspect of the job, especially with the new DAQ installation. “The KWT student crew is known for our ability to solve problems quickly. This transition to the new DAQ definitely gave us more problems to solve, but we’re smoothing it all out and have gained even more valuable engineering experience in troubleshooting, problem-solving, and bonding over the challenges.”