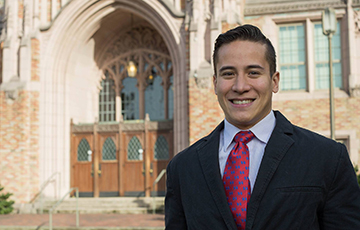 Congratulations to Gustavo Eidji Camarinha Fujiwara, a PhD student in the William E. Boeing Department of Aeronautics & Astronautics who has been awarded the Josephine de Karman Fellowship. He was one of only eight students selected in a highly competitive process from a pool of about 400 applicants from universities nation-wide. The de Karman fellowship was established in 1954 by Theodore von Karman, a world renowned aeronautics expert, to recognize and support outstanding academic achievement by students who reflect Professor von Karman’s high standards.

Gustavo Fujiwara works with A&A Professor and College of Engineering Dean Michael Bragg and A&A Professor Eli Livne in the field of multidisciplinary design analysis and optimization applied to aircraft design. Their research targets ways to improve the design of future generation aircraft by developing an integrated optimization framework that combines the disciplines of aerodynamics/structures/aeroelasticity/controls to allow increased fuel efficiency and reduced environmental impact of aviation on climate change. Fujiwara’s interest in the topic originated from his lifelong passion for aviation and aeronautics that started early in his childhood in Brazil. He acknowledges it is a great honor to have received a fellowship created by Dr. von Kármán, whose work inspired and fueled major advances in the fields of aeronautics, and credits professors Bragg and Livne for their extraordinary guidance and support along the way.

Fujiwara volunteers as an academic tutor at local homeless shelters and schools, leading two projects focused on improving education in underprivileged communities in Seattle, and encouraging young students to pursue college degrees and careers in science and aeronautics. He also enjoys flying airplanes as a private pilot, hang gliding, and fishing.

In addition to the de Karman Fellowship, Fujiwara has previously been recognized for his scholastic achievement as an awardee of the Dwight Eisenhower Graduate Fellowship from the U.S. Department of Transportation, the UW Graduate School Latino/a Scholars Graduate School Fellowship, the Mortar Board Alumni/Tolo Foundation Ayers Scholarship, the Burton and Paulyne Batchelor Endowed Fellowship, and the AIAA Aviation 2016 Best Student Paper Award.