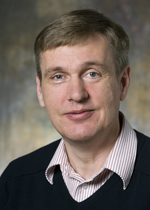 Professor Hermanson received his BS in 1977 from the University of Washington Aeronautics and Astronautics Department. He worked at Boeing Aerospace Co. before attending the California Institute of Technology, where he received his MS in 1980 and PhD in 1985, both in Aeronautics. After graduating from Caltech he was a Post-doctoral Fellow at the Universität Göttingen in Göttingen, Germany. Subsequently, Dr. Hermanson was on the staff of the UW Applied Physics Laboratory, after which he was a Research Scientist at United Technologies Research Center in East Hartford, CT. Prior to joining the UW A&A Department faculty in 2002, he was on the faculty of Worcester Polytechnic Institute in Worcester, MA, where he was appointed the 10th George I. Alden Chair in Engineering. Professor Hermanson is a Fellow of the ASME. He is also an Associate Fellow of the AIAA, and has served as Associate Editor of the AIAA Journal and on the AIAA Air Breathing Propulsion Technical Committee.

Professor Hermanson's research interests are primarily in the general field of aerothermofluids, with emphasis on aerospace propulsion, combustion, gas dynamics, and multiphase flow. His first research contribution was an experimental study of the effects of heat release in turbulent, reacting mixing layers. Subsequently he investigated the injection of gaseous and supercritical fluid jets into supersonic streams. More recently, he and his coworkers studied experimentally and numerically the interaction of shock waves with turbulent jets and vortex rings, with emphasis on density-dependent mixing mechanisms in these flows. These problems, as well as other research Dr. Hermanson has conducted in fuel injection and mixing enhancement in supersonic flow, are relevant to supersonic combustion ramjets (scramjets). He has also experimentally investigated low-emissions approaches in lean premixed and partially premixed combustion systems.

Professor Hermanson's current research activity and interests including unsteady turbulent combustion in normal- and microgravity, liquid fuel injection into supersonic flow, and film condensation under reduced gravity conditions. In addition to providing additional insight into the nature of turbulent flames, the combustion research may be useful in the development of compact, low-emissions combustors for terrestrial applications. The film condensation research has potential applications for terrestrial and space-based power systems as well as fluid handling in space. His research to date has been supported by ONR, NSF, NASA, and private industry.

For Apollo 11's 50th anniversary, UW presents reflections by those who were inspired to work toward a future in space.