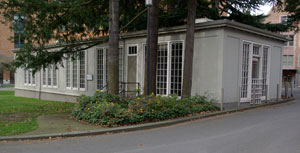 The Aerodynamics Laboratory building was designed by Bebb & Gould and built in 1917 for a cost of $5,829 from funds donated from Boeing Airplane Company. Below grade walls are 8 foot thick concrete and the upper walls are wood.

This 1,612 square foot building housed the first wind tunnel built in the Northwest. To make the tunnel operational, William E. Boeing, assisted by Prof. Kirsten of the College of Engineering, financed the cost. During the 1920's, the tunnel was used to test various Boeing aircraft models. Originally, the tunnel had a small glass enclosed balcony mezzanine at grade level on the north end, but later the balcony was removed.

Today the tunnel, operated by the Aeronautics & Astronautics Department, is used by University, government, and industry personnel for aerodynamics testing.