Persistent Vortices Along a Wavy Wall

Vortices are being examined as a possible mechanism to skin friction reduction between a solid boundary and fluid flow. In order to increase stability of the vortices, a wavy wall apparatus has been built to “capture” the vortices induced by an array of vortex generators. Since heat flux and skin friction are analogous, the skin friction effects can be inferred by examining heat transfer through the wall into the mainstream. See Stationary vortices and persistent turbulence in Karman grooves.

Current research is seeking to determine the effectiveness of these persistent vortices when placed downstream of a grid generating freestream turbulence. The goal is to correlate these freestream turbulent scales and intensities to the circulation strength necessary to keep these vortices persistent. 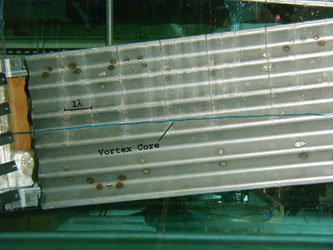 Dye injected at the apex of a vortex generator showing the core of a persistent vortex held stationary by the wavy wall. 1 plate wavelength and vortex core indicated.