A magnetic surface probe array was included in the HIT-SI design at the time of manufacture. The array is capable of measuring the poloidal and toroidal components of the surface magnetic field at 96 locations in the machine.  At each location there is a magnetic surface probe composed of three nested windings—normal, poloidal and toroidal—indicating for the direction they are sensitive to.  The magnetic surface probes are mounted in the copper wall of the HIT-SI vessel, and are separated from the vacuum by a thin stainless steel disc.  Each probe is electrostatically isolated and shielded from the experiment.  A calibration curve corrects for the attenuating effects of the copper wall and recovers the field at the surface of the plasma facing wall. 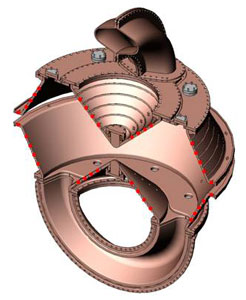 The internal magnetic probe provides measurements of the poloidal, toroidal, and radial magnetic field profiles within the plasma. Three stems allow for measurements with a toroidal/poloidal displacement. This is a retractable probe with an insertion depth of 26.6 cm.

The interferometer measures the electron density along a chord of the plasma. The HIT-SI interferometer, donated by Lawrence Livermore National Laboratory, uses a CO2 laser to optically pump two difluoromethane FIR lasers. A Martin Puplett configuration, shown below, is used to measure the phase change of the laser beam passing through the plasma. Measuring the density gives information on the particle confinement time, fueling dynamics, and our plasma performance in relation to the Greenwald limit. 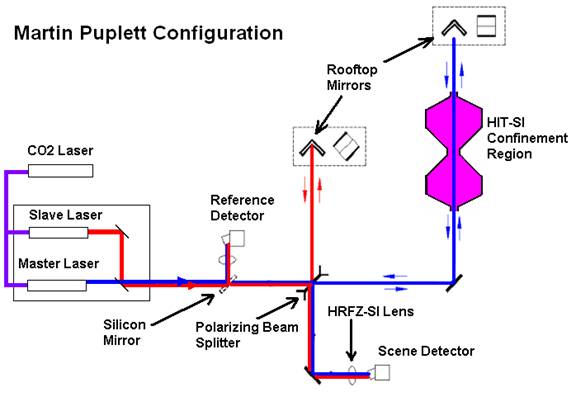 A bolometer is a device to measure radiated power.  There are presently three bolometers operated on HIT-SI.  A midplane bolometer images a wide swath of the confinement region in order to give a "big picture" of the amount of power being radiated.  The other two bolometers are mounted axially.  One of these bolometers images an injector, while the other does not.  By comparing these signals, the ratio of the power radiated in the injector versus the confinement region can be determined.

Still cameras are used to observe areas of interest in the plasma. The first picture is of one injector mouth taken during plasma operation with a combination IR/visible light camera is below. The second picture is with a visible light only camera. 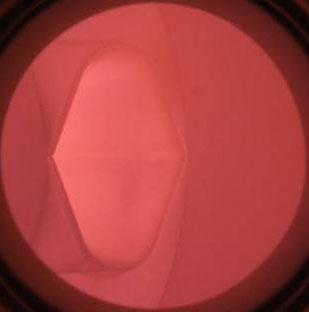 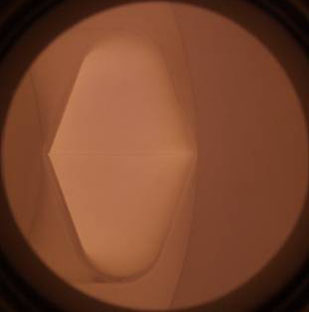 The H-alpha diagnostic measures the time-dependent intensity of the H-alpha line, 656.3 nm.

The IDS diagnostic is a passive optical system for measuring the temperature and velocity of ions in the HIT-SI experiment.  Radiated emission along a chord through the plasma is coupled to a spectrometer by a fiber optic bundle.  The spectrometer grating images a narrow wavelength range about an atomic emission line and a lens disperses the light over a 16 channel photo multiplier array.  The width of the emission intensity is related to the temperature—an effect of Doppler line broadening.  The bulk velocity of the ions results in a Doppler shift of the atomic line spectrum.  The IDS diagnostic is used in the visible spectrum and can be tuned to wavelengths between 250 and 700 nm.

The SPRED spectrometer yields spectral information about the impurity content of the plasma.  It disperses light from 200 nm (ultraviolet) to 550 nm (visible) wavelengths. Spectral lines present in the SPRED data allow us to compare the relative magnitudes of impurities from shot-to-shot.

Two VUV spectrometers give time-resolved measurement of a particular spectral line. Typically we use the VUVs to compare two oxygen or two carbon lines. The two spectrometers have the same field of view and have been cross calibrated to yield the same signal strength for the same wavelength setting.

A 16-chord pinhole camera has the capability to detect soft x-rays due to magnetic reconnection and as a temperature monitor for plasma performance.

The Langmuir probe is a perturbative diagnostic.  The local electron temperature and density are determined by measuring the voltage potential between the electrodes extending from the tip of the probe. 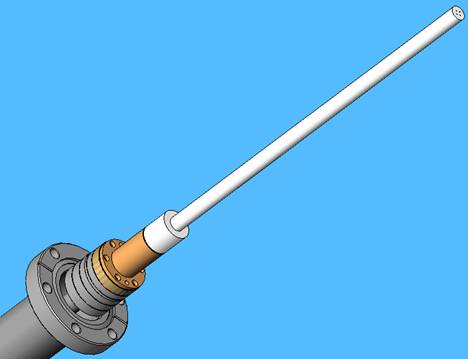