2D-wall inserts can be mounted in the tunnel test section to obtain two-dimensional flow for testing models. The model still uses the main KWT external balance. The walls extend from the floor to the ceiling of the test section with a span of 41.5-inches between them. Dynamic pressure is measured using four manifolded total ports and four manifolded static ports located 46.5 inches ahead of the test section centerline. A detailed upflow angle and dynamic pressure calibration of the 2D test section, using a fivehole probe, shows the upflow is -0.333°. End plate drag effects can be determined during the test by using the 20” wake rake to measure the wake deficit, from which a drag effects can be calculated.

A static pressure gradient of -0.0050 CP/ft exists in the 2D test section that is not present in the 3D
section. The gradient is present because the 2D inserts prevent the test section from being directly vented to the atmosphere, combined with the increase in boundary layer thickness on the 2D walls. The static pressure gradient is accounted for in data reduction by applying a buoyancy correction to drag.

Due to its infrequent usage, the 2D-wall inserts are stored in a UW warehouse off campus, and so its availability needs to be verified each time before UWAL commits to its use. Call for status.

Upon delivery of the model, KWT personnel will assist in the assembly and mounting of the model. To help unload large models, a forklift is kept on-site. Once the model has been partially assembled, a hoist is used to lift the model from the ground floor and into the test section. KWT has a set of lifting eyes that can be attached to the model if the model has threaded holes at least ½” deep for a 3/8-16 bolt.

The model mounting strut extends from the external balance through the floor. A two- or three-point “fork” connects the mounting strut to the model by a set of pins. The strut and fork yaws with the model allowing both pitch and yaw angles to be set. The strut is covered by a streamlined fairing (see Figures 16 and 17) which does not rotate with the model. All fork attachments/fittings should be recessed into the bottom of the model surface (e.g. wing or body) and closed off with cover plates to reduce aerodynamic interference.

The pitch angle ranges for the two- and three-point mounting systems are provided in the respective drawings (see Figures 18, 24, and 25). These ranges are based on two criteria:

To determine the total height from the test section floor, add the cap thickness to the fairing height (31.75”).

A strut base plug fouling ring can be used with fairing caps 4.3 and 4.6. It is only available for use with the Single Strut. Fouling ring thickness is 7/8” with an outside diameter of 4-1/4”. All other caps have built-in fouling circuits.

The standard model mount consists of a "V" shaped yaw fork and a pitch arm (see Figures 17 and 18). The model pitches about the upper end of the yaw fork and the whole assembly rotates in yaw. Fitting Nos. 3 and 4 are usually used with the yaw forks and No. 2 for the pitch arm when mounted in a wing.

The yaw forks designated by -H place the model trunnion at the balance moment center. The -H yaw forks usually mount into the wing (for wing alone model build up). For large models, yaw forks 10-H or 14-H are recommended since they are stiffer in yaw and roll.

The two yaw forks designated -L place the trunnion five inches below the balance moment center. The -L forks can be used for a high wing model with a deep fuselage to keep the wing near the tunnel centerline.

The two-point model mount consists of a strut and a pitch arm. There are several different types of struts available . A two-point mount is normally used for testing since it reduces aerodynamic interference and tare effects compared to a three-point mount.

Three-dimensional models exist for the trunnion blocks shown on the following pages. The parts were modeled using UniGraphics software. Electronic files containing the 3D model are available in either UniGraphics or IGES (International Graphic Exchange Standard) formats upon request.

The table below indicates the location of the trunnion with regard to the center of the test section. These values are needed for transferring moments from the balance moment center (BMC) to the desired model moment centers specified by the customer.

The Single Strut has a 0.75” diameter internal tube for routing instrumentation cables. A tall fairing cap can be installed on the fairing to cover the cables as they exit the single strut tube. This further reduces aerodynamic effects caused by the cables since they are covered by the cap.

The pitch arm and strut shown in the following graphics are representative of the mounting hardware at KWT but should not be used for model design purposes. Please contact KWT for information about the specific pitch arm or strut you are interested in using or download the CAD files. 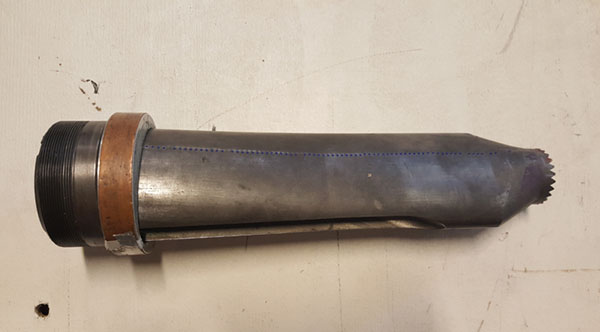 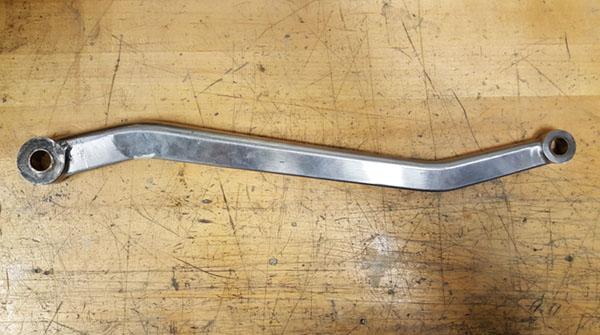 Any of the single struts can be used to support a model from a single point. A one-point mount should only be used with small models at low airspeed to minimize the chance of structural failure.

Another possibility is to mount the model directly to a yaw turntable that lies flush with the 8’ x 8’ ground plane. The turntable is three feet in diameter and sits 6.25 inches above the test section floor. A yaw turntable allows for ±30° of yaw. By mounting the model to a second plate that mounts to the first turntable, the orientation of the two plates can be changed to allow for 180° of yaw.

It is not unusual for a model to need a special mount created for a test since there are no standards for the industry. If proper model drawings are provided, KWT can help in designing and manufacturing the appropriate model mount (see Auxiliary Services, Model Design/Construction).

Additionally, a smaller ground plane is available for use with a yaw turntable. The small ground plane measures 8-ft long, 12-ft wide and has a fixed height of 17.4 inches above the test section floor. It has a 20-inch diameter turntable. The trailing edge flap of the ground plane can be adjusted to avoid separation. This ground plane is often used for testing sailboat keels and full-scale parts, such as aircraft antennas 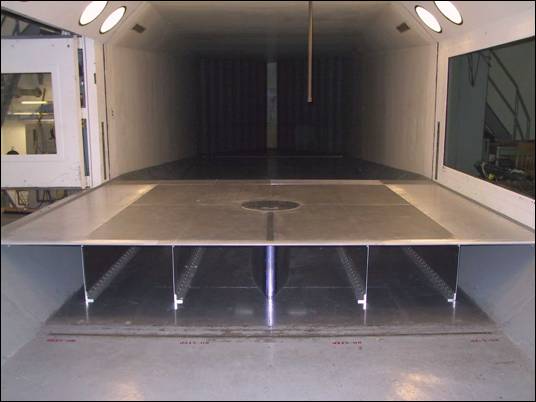 Due to its infrequent usage, the 8’ by 12’ Keel Ground Plane with 20’’ Turntable is stored in a UW warehouse off campus, and so its availability needs to be verified each time before UWAL commits to its use. Call for status.